This is going to be a short review of the 2009 season of Atlanta Braves third baseman Chipper Jones. Not because he doesn't deserve a lengthy review, but because it's hard to extrapolate what really happened to Chipper this year. Was it as bad as his 2004 season -- his lowest OPS+ season outside of his rookie year? Maybe. Chipper's OPS+ was one point higher this year (117) than it was in 2004 (116). What was startling about Chipper's '09 campaign was the decline in his power output. 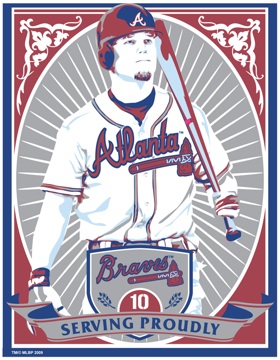 While I don't think anyone, even Chipper, definitively has the answer to that question, we can see the decline of his power throughout the year, and from that infer that perhaps the rigors of the long season (his most games played in 6 year) on his now 38-year old body may be catching up to him... but maybe there's something else too...

Slugging by Month for Chipper Jones:

When I look closer at these numbers, and when I take away his September numbers from 2008, what I see is the absence of a real power threat hitting behind Chipper Jones beginning to affect his power. Take September 2008 as an anomaly or a few lucky hits, but every other month since Mark Teixeira left, Chipper has struggled to come close to his career slugging average. This is no knock on Brian McCann, but we all know that McCann, as good as he is, is not really a cleanup hitter, at least not one that pitchers fear.

All season it seemed that Jones was reaching for pitches and swinging at balls outside of his normal zone. This was because he wasn't getting the pitches he's accustomed to getting inside the zone. Combine the lack of a supporting batter hitting behind Chipper with his aging body and slowing swing and perhaps a desire to go outside his strike zone to make things happen and the result is possibly the worst offensive year of Chipper's career in 2009.

This, more than anything, is why the Braves must go out and get a big bat this off-season. This is also something to point to as a large failure of last off-season. What if we had signed Adam Dunn? As many flaws as some say he has, pitchers don't want to face his power. So by signing Dunn or someone like him the Braves would not just be adding a hitter of that caliber, but they'd also be boosting the output that they would likely get from Chipper Jones. 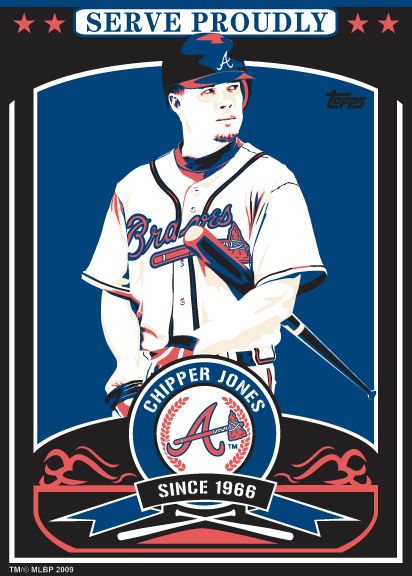 I am excited to be exclusively displaying the work of artist Chris Speakman, who allowed me to use these two prints of Chipper Jones. Speakman is licensed by Major League Baseball to create and sell "1940's propaganda style" limited edition hand made screen-prints on paper. He is currently working on a a series of baseball cards with Topps featuring his art. If you like what you see, head to www.sportspropaganda.com to view more and purchase these prints.