While the Braves top Minor League center fielders don't have the star power present in right field, or the pure power present in left field, they are still an interesting collection of speedsters and defensive stalwarts. While none currently seem like locks to become future stars, and maybe not even future starters, fortunately, the Braves are well set at the Major League level with Nate McLouth and the center fielder of the future, Jordan Schafer.

1. Matt Young B/T: L/R Born: 10/3/1982 Ht: 5'8" Wt: 175
Young takes the top spot after a second excellent season at Mississippi that saw him take home the award as the Southern League's Top Huslter. After hitting .289 with a .769 OPS along with 30 stolen bases for Mississippi in 2008, Young improved to a .289 average, .827 OPS and a team record 43 stolen bases. After playing most of his games in left field in 08, he shifted and played mostly in center this season. The same speed he utilizes on the basepaths enables him to cover an excellent amount of space in the outfield, and he takes good routes while making intelligent decisions. But, his arm is well below average, so that negates some of his defensive value.

A line drive hitter, Young doesn't make the mistake of trying to hit for power, and instead contents himself with spraying the ball to the gaps, collecting 23 doubles and 10 triples this season. He also makes use of his tiny frame (his listed height of 5'8" is a good bit of an exaggeration) to work a ton of walks, racking up 97 this season on the way to a .414 on base percentage.

Young was originally signed as a second baseman, so he has a bit of versatility, but he's only played 59 games there as a professional, and half of those came in 2006. He'll enter next season as a 27 year old, so he's not a typical prospect, but there's plenty of reason to think that his speed and defense, combined with his on base skills, could make him a valuable part of a Major League bench. If he's left off the Braves' 40 man roster this offseason, there's a possibility that a team looking to keep him as the 25th man on their roster and utilize him as a late inning pinch runner and defensive replacement might take a chance on him in the Rule V draft. 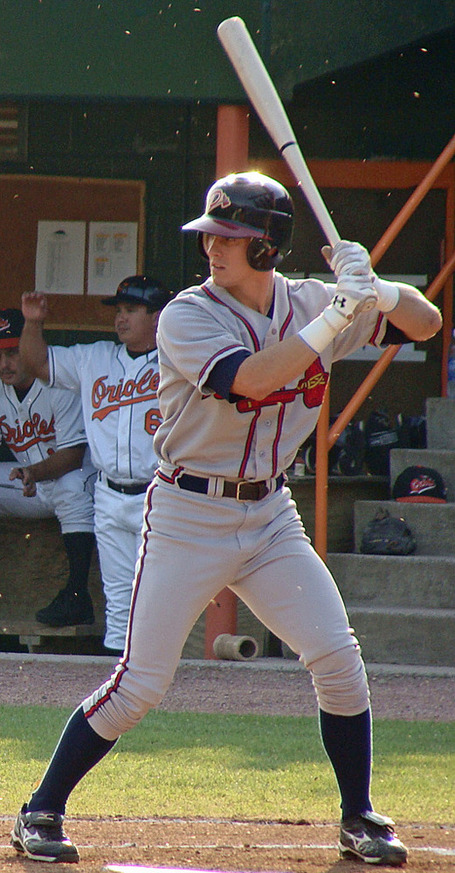 2. Cory Harrilchak B/T: L/L Born: 10/27/1987 Ht: 5'10" Wt: 175
Harrilchak, who turned 22 yesterday, was drafted in the 14th round this year and excelled for Danville, hitting .324 with a .842 OPS and 19 stolen bases as the team's regular hitter in the three hole. He split his time fairly equally around the outfield, playing 25 games each in center field and right field while playing 11 in left field, but, mostly due to his bat, he profiles best as a center fielder. He has excellent speed and a great knowledge of how to play the outfiled, along with a fairly strong, accurate arm.

Harrilchak has a slight frame, so he's unlikely to develop much power, but he's already smart enough to make use of his skills as a line drive hitter, spraying out 10 doubles and 5 triples in his 60 games, and he was able to effectively add speed to his game, getting caught stealing only twice in his 21 attempts. He also showed a knack for getting on base, with a .401 on base percentage, another indicator that, while he may have hit third for Danville, he profiles better as a leadoff or number two hitter in the future.

While he was a bit old at 21 for Danville, like Riann Spanjer-Furstenburg, Harrilchack had an outstanding professional debut, showing plenty of promise that he'll develop into a fine prospect. With his age and his dominance of the Appy League, there's a possibility that he could start 2010 at Myrtle Beach, but an assignment to Rome seems more likely. While he's unlikely to be considered a top flight prospect, at least until he has a breakout season at a more age appropriate level, Harrilchak has the tools to work himself into Atlanta's Major League plans in the future.

3. Kyle Rose B/T: R/R Born: 5/24/1989 Ht: 6'0" Wt: 165
Rose was drafted in the 8th round of the season's draft and, like Harrilchak, he was slightly old for his league, playing for the Orlando Braves in the GCL as a 20 year old. But, unlike Harrilchak, he didn't exactly dominate, though he still fared well, hitting .293 with a .750 OPS along with 27 stolen bases. The speed was the biggest asset to his offensive game, as he led his league, stealing those bases in just 48 games, and, more impressively, in just 63 times of reaching first base, meaning that he stole a base 43% of the time he reached first. For comparison, this year's Major League stolen base leader, Jacoby Ellsbury, stole 35% of the times he reached first. Those are tremendously impressive numbers, especially when you factor in a .397 on base percentage.

While he excelled at the speed game, Rose showed almost no power, slugging just .354 on the season. His incredibly slight frame suggests he isn't likely to gain much power, but if he can continue to get on base at a great clip and steal bases at an oustanding rate, he'll turn into a great prospect. He made 4 errors in center field this season, which raises some concern about his defense, but without the context of those errors, it's possible to write them off as the by product of his first professional season.

While Rose may have been slightly old for the GCL, he won't turn 21 until late May of next year, so if he is able to start out at Rome he'll be in step with the ages that typify better prospects. If he's able to augment his speed with a bit more slugging, he'll likely emerge as a top flight leadoff hitting prospect. Even if he's unable to, his immense speed will make him a valuable player. 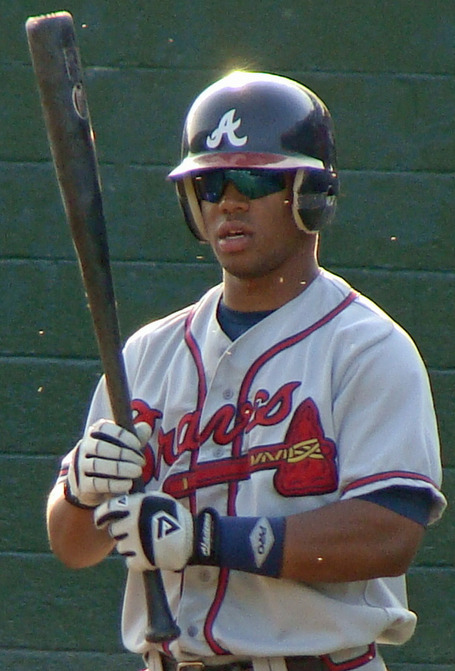 4. LV Ware B/T: R/R Born: 3/18/1987 Ht: 5'10" Wt: 185
Ware struggled mightily for Rome in April, hittting just .130 with a .423 OPS in just 51 plate appearances before he was sent to Extended Spring Training. But, a huge part of that poor showing was tied up in the five man outfield rotation that Rome was utilizing at the outset of the season, leading to irregular playing time for Ware, . He rebounded easily though once Danville's season began, hitting .293 with a .740 OPS and a league leading 24 stolen bases as the team's leadoff hitter.

Those numbers were an improvement over the .272 average, .727 OPS and 13 stolen bases that he put up for Danville in 2008, which is important, because even though he was forced to repeat the level, he showed a marked improvement. Like all the other center field prospects, Ware doesn't have much power, hitting no home runs this season, but he makes up for that lack with a strong line drive swing and an excess of speed. Above all, Ware's greatest asset is his mental game, as he has established himself as a smart, polished player who gladly takes on a role as a team leader. He combines that mental edge with his speed to make himself a plus defender, capable of covering a large amount of ground in center field, with a slightly above average arm. He also takes this edge to the plate, as he is a smart hitter, willing to hit behind runners and bunt when advantageous.

Ware is likely to return to Rome to start 2010 and since he'll turn 23 just prior to the start of the season he's too old to be considered a top tier prospect. But, he is a solid, polished player who seems likely to be able to build on his success one level at a time. At worst, he's likely to develop into a 4th outfielder capable of providing great defense off the bench and a ton of speed, but his work ethic and baseball accumen suggest better is in store.

He's big for a center fielder, but he's able to use his strong body to make himself a more than capable defender, spending the majority of his games in the middle of the outfield, while playing 16 in right field and 11 and left field. At this point, Culver has shown little aptitude for hitting in the Minor League, compiling a .236 average and .634 OPS in 579 career plate appearances. But, he'll enter next season as a 21 year old, so there's time for him to improve, but with the wealth of young outfielders coming up from Danville and Orlando, there might not be enough at bats available for him. 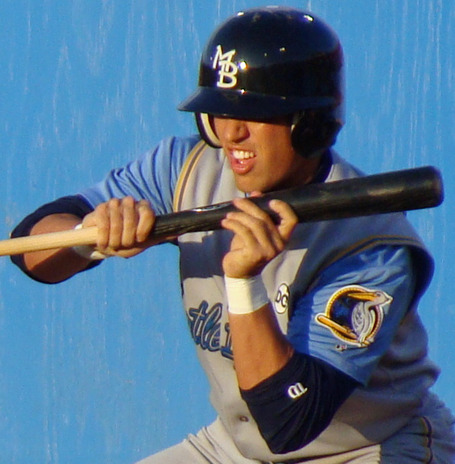 This marked improvement was a welcome sight for Miles after his poor showing for the previous year and a half, and looks like a good indication that he's begun to make the adjustments necessary to develop into a Major League prospect. Another change that has aided him is the shift from the infield to the outfield. Originally drafted as a shortstop, MIles had seen most of his playing time at second base prior to 09, playing just 13 games as an outfielder. But 2009 saw him make the full time switch, as he played just 19 games in the infield, compared to 64 in center field, 21 in left field, and even 8 games in right field. While he never seemed to grasp playing the infield, compiling just a .957 fielding percentage there for his career, he's shown apptitude for the outfield, making use of his speed. While he still has great lengths to go in learning the best routes and actions to take in the outfield, and his well below average arm will always be a bit of a liability, he certainly profiles better in the future as an outfielder.

Miles will likely return to Myrtle Beach in 2010 as a 23 year old, looking to build on his strong second half. He'll need to work on hitting the ball with more authority, as he's never hit more than 9 doubles in a season, and he'll need to walk more to utilize his speed, which he needs to utilize more, but his overall situation isn't as dire as all that sounds. There are positives to his game, and if he can continue to show an ability to adjust and adapt, he might become a Matt Young like prospect in a few years.