If you buy something from an SB Nation link, Vox Media may earn a commission. See our ethics statement.

Here is the third installmentt of the terrific series by Chris Mays, highlighting several times that Hank Aaron faced racism. These were originally posted on his blog, The 8 Things, and are reprinted here with permission.

Since Major League Baseball didn't extend any further south than Cincinnati, St. Louis and Washington DC at the time, the south had become a hot bed for minor league baseball. As a sign of the times, the southern minor leagues would fight integration tooth and nail. Many teams played in cities with laws that explicitly prohibited mixed race play. Teams would refuse the assignments of African-American players from their big league counterparts. One league even attempted to ban an entire franchise for willingly fielding African-American players. 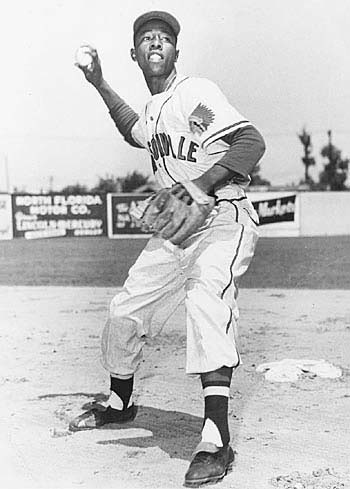 The Braves sent Hank Aaron to their minor league boot camp in Waycross, Georgia. Here, the players lived in integrated barracks, not unlike the Army. Occasionally, there would be a bus to take players into town so that they could run errands and do laundry. On one occasion, Aaron missed the bus back to the barracks and had to return on foot. It was a long walk in the dark and it proved to be a harrowing experience upon his return. There was a fence to get on the grounds and then a long road to the barracks. Aaron decided it would be easier to cut through the woods. When he came out of the woods, a security guard spotted him and began shooting. Fortunately, he would make it into the barracks without getting shot.

Aaron was assigned to the Braves Jacksonville team coming out of camp where he would play for a manager named Ben Geraghty. Aaron, along with his teammates Horace Garner and Felix Mantilla were going to be integrating the South Atlantic League (along with two players on the Savannah ball club). Their manager wanted them on his team, but he also wanted them to know what they would be up against. During the season, he would make a point of visiting them wherever they were staying and would often eat with them when they couldn't eat with the rest of the team. They knew it wouldn't be easy, but the young players were glad to know their manager was on their side.

At ballparks all over the South, the Jacksonville team was drawing large crowds. The "black section" in each park was full to cheer the African-American players, and the white sections were full just to see the spectacle. This could have led to a disaster. After being hit by a pitch in Macon, Mantilla started to rush the mound but was quickly restrained by teammates. First white fans began spilling onto the field in anger, followed by the African-American fans. If not for the police, it is conceivable that a race riot would have taken place.

Aaron, Mantilla and Garner would suffer indignities at every turn. The fans would throw rocks at them. They were insulted with every racist slur known to man. White fans would throw black cats on the field. Aaron was chased through the streets of Phenix City, Alabama by a group of white guys. Even worse, they would receive death threats, often threatening to shoot them from the stands. At no point could they relax at the ballpark. Their only possible revenge was to play the game well and that they did.

Aaron would be selected to play in the league's All-Star Game. Rumor had it that Georgia Governor Herman Talmadge was going to block him from playing. Aaron would be spiked in the last game before the All-Star Game and it became a moot point. No black player would make the All-Star team that year. Still, Aaron would lead his team into the playoffs. One white fan would greet the team after they clinched their spot in the playoffs with "I just wanted to let you n*****s know you played a helluva game."

When it was over, Aaron knew he was a survivor. He had taken everything that could be thrown at him and thrived as a ballplayer. He saw that he and his teammates had slowly won over many of the fans in the league during the season. It has been said that Aaron might have been the catalyst for Jacksonville to become a more racially tolerant city. "I'm not sure I've ever done anything more important" was Aaron's response.

My primary source for the information in this series is Hank Aaron's 1991 autobiography, I Had a Hammer: The Hank Aaron Story