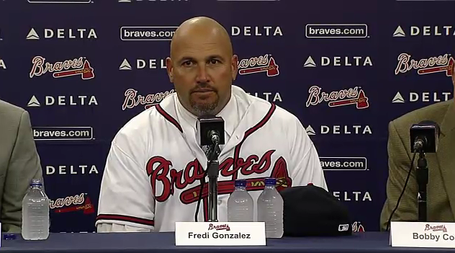 Your new 2011 Atlanta Braves manager, Fredi Gonzalez. (I will be calling him Fre-Go.)

The Braves signed hm to a three-year contract. Announcement on coaches will come at a later date. He said the right thing in the press conference, "Not a person alive that could replace Bobby."

The Braves will retain Roger McDowell as the pitching coach, Eddie Perez as the bullpen coach, and Brian Snitker as the third base coach. Terry Pendleton will be retained, but will become the first base coach and infield instructor. Carlos Tosca will follow Fre-Go from Florida to Atlanta and become the Braves new bench coach. Chino Cadahia and Glenn Hubbard will not be retained. The club will undergo a search for a new hitting coach.

Good coaching moves. I like them taking their time looking for a new hitting coach. That is a big area that needs improvement for the Braves.