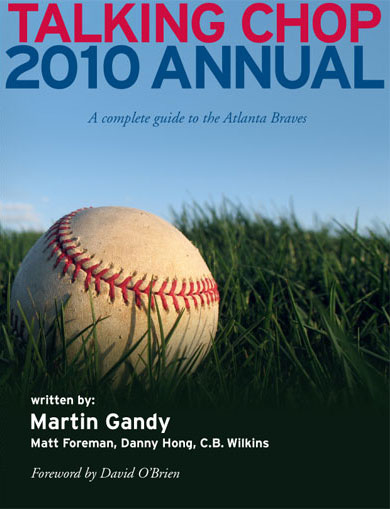 Announcing the release of the first ever Talking Chop Annual, the Talking Chop 2010 Baseball Annual. This work has been a collaboration between many folks here on the site and around baseball. We hope that this will enhance the Atlanta Braves fan experience by creating a book dedicated to nothing but the Braves, that will help you relive the 2009 season and look forward to the 2010 season.

Go here to purchase the Annual >>>

This book contains many wonderful things, including the following:

This is our first crack at the Annual business, and it's something we hope to make a yearly occurrence. If you've every wondered how you can support the great work done by everyone here at Talking Chop, here's your chance... and you get a Braves Annual too.

Go here to purchase the Annual >>>