Heyward, Braves Walk Off on the Rockies, 4-3

Share All sharing options for: Heyward, Braves Walk Off on the Rockies, 4-3

Wow. Did that just happen? Did a 20-year-old kid really just put the entire Braves offense on his back and carry it to a win? Did Jason Heyward--who graduated from high school less than 3 years ago--really just hit a 2-out, 2-run single in the bottom of the ninth to turn an excruciating 3-2 loss into a glorious 4-3 win? That seems too good to be true. "Incredible," in the most literal sense of the word.

It appears that Jason Heyward has no time for such puny concepts as "doubt" and "probability" and "age," no regard for such hoary cliches as "too good to be true." As amazing as this is to say, he is living up to the hype. As much as I loathe drawing conclusions about players based on 12-game samples, how can you not conclude that Heyward is destined for greatness? Hell, how can you not conclude that he's already there? (Another concept Heyward has little use for: "small sample size.")

More recap and Awards after the jump.

In addition to his game-winning hit, Heyward also walked twice on the day, including a bases-loaded walk to drive in the Braves' 2nd run. His final line: 1/3, 3 RBI, 2 BB, 1 K, and a staggering 1.028 WPA. In other words, Jason Heyward literally added more than 100% to the Braves' chances of winning today. (How is that possible? Other players kept lowering our chances so that J-Hey could bring 'em back up.) By the way, Jason Heyward is now the major-league leader in WPA with 1.67. His 15 RBI are near the top of the list as well.

In non-Heyward news, Jair Jurrjens started for the Braves and pitched very well. He went 8 innings and really should have gotten a win. His velocity was back to normal, and he got tons of swinging strikes which led to 9 K's. He did give up 3 runs, though, including very damaging solo HRs to Ian Stewart in the 7th (which tied the game) and Carlos Gonzalez in the 8th (which put the Rockies up 3-2). Both homers were hit quite hard, but both were near the right field foul pole; with a bit better luck, JJ only gives up 1 run and the Braves don't need Heyward's heroics. JJ's final line: 8 IP, 5 H, 3 ER, 3 BB, 9 K, -0.119 WPA.

Eric O'Flaherty pitched a perfect 9th for the Braves, striking out 1 and picking up the win.

The story of the game for the Braves hitters (until the 9th) was the inability to score despite tons of baserunners. Rockies starter Greg Smith, in a Derek-Lowe-like performance, walked 7 men and gave up 5 hits in 5.1 IP, but only gave up 2 runs. The runs scored on a Martin Prado sac fly in the first (scoring Matt Diaz, who had tripled to lead off the game) and the Heyward bases-loaded walk. Smith's final line was 5.1 IP, 5 H, 2 ER, 7 BB, 5 K, and a -0.021 WPA.

The Braves couldn't score off the first three Rockies' relievers either, despite getting another 2 walks and a hit in 2.2 IP. But in the 9th, flamethrowing lefty Franklin Morales came on to try to save the game, and things started to get weird. Morales gave up a leadoff hit to Martin Prado, followed by a flyout to center by Chipper Jones that Chip Caray managed to convince thousands of Braves fans was a walk-off HR. During the next at-bat, the first-base ump failed to call an obvious balk on Morales, leading to much confusion. Just a pitch later, though, the second-base ump did call a balk, this time on a pitch that was not a balk. That's right, folks. It was a make-up balk call. Is there no act of idiocy that MLB umps will not sink to?

Anyway, the balk turned out not to matter, because Brian McCann walked anyway.  The next batter, Troy Glaus, hit the first pitch for what looked like a game-ending double-play. He was called safe at first, though, and the Braves would live to fight for another batter. The call was questionable, to say the least (if I was a Rox fan, I'd be livid), but let's face it--these umps were awful for both teams this whole series. Morales clearly seemed a bit unnerved by this series of events, and he walked Yunel Escobar on 5 pitches. That brought up Heyward, and well, you know what happened after that: 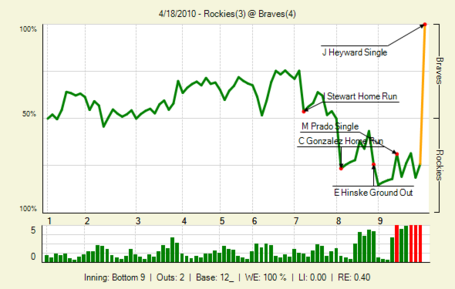 Sweet, sweet victory. Enjoy this one, Braves fans. There aren't many like it.