How Many Teams Would Kenshin Kawakami Start For?

Share All sharing options for: How Many Teams Would Kenshin Kawakami Start For?

Thanks to TC member EricGreggWasPaidOff for giving me the idea for this post.

It's no secret that Kenshin Kawakami is off to a poor start in 2010. It's also no secret that his win-loss record with the Braves is very poor (7-18 at last count). That record is not indicative of his performance, however. As most of you know, KK has received very little run support throughout his Atlanta tenure: only 65 runs of support in 38 games (31 starts). Though his ERA this year is 5.73, his overall ERA with the Braves is still a solid 4.18.

These wide gaps have caused much debate on Talking Chop. Some members have been calling for KK to be moved to the bullpen, saying that he's just not an MLB-caliber starter. Others have been saying that he's perhaps the best 5th starter in all of baseball (I've made a similar claim). The goal of this post is to determine just where Kenshin ranks relative to other MLB starters. Is he a solid #4 starter or a poor #5 starter (or somewhere in between)? If he is a #5 starter, how many teams would like to have him in their rotations?

There are 3 steps to this process:

My conclusions, the stats, and some spiderweb graphs after the jump.

To start, I took a sample of all the pitchers who had started at least 1 MLB game as of Sunday (there were 177 in all). My next step was to determine how to rank them. I counted only a pitcher's numbers as a starter. I had two main components to my ranking: (1) a pitcher's ability to eat innings and (2) his run prevention.

For the first component, I totaled the number of innings each pitcher had pitched as a starter since the beginning of the 2009 season. For run prevention, I looked at a player's ERA, FIP, and xFIP*. Since both FIP and xFIP are on the same scale as ERA, they are directly comparable. If you don't like fancy stats like FIP, just think of it as a proxy for a pitcher's peripheral stats like walks, strikeouts, and home runs.

* For those of you who are unfamiliar with these stats, FIP (or Fielding-Independent Pitching statistic) measures how effective a pitcher has been using only 3 components: strikeouts, walks, and home runs allowed. xFIP is a variant of FIP that also takes into account a pitcher's ground-ball rate (more ground balls are good) and his home run / fly ball rate. The theory is that a pitcher who gives up homers on a high percentage of his fly balls is unlucky and should have given up fewer HRs, so a higher HR/FB rate will equal a lower xFIP.

So as to minimize the damage of small sample sizes, I used a player's ERA, FIP, and xFIP from this year and from 2009 (or in a few cases, the last year in which the pitcher started a game in MLB). However, I made one key adjustment: I gave double weight to a player's 2010 numbers. I did this because I recognize that a player's recent performance should bear more weight than his less-recent performance. In other words, "What have you done for me lately?" For example, I treated Kawakami's 2010 numbers as if they came in 66 innings rather than 33. Using these figures, Kenshin's ERA for my rankings is 4.53 (without the adjustment, it would have been 4.30).

Here are some graphs showing how the Braves' starters stack up with the rest of the league in each of the 4 categories used in this study. In these graphs, a smaller shaded area (closer to the center) indicates a better ranking. The dashed lines represent the outer boundary of each rotation slot. Thus, any point that is within the innermost dashed diamond is equivalent to a #1 starter-type performance. Within the second-smallest diamond indicates a #2 starter, and so on. Here is Jair Jurrjens' graph: 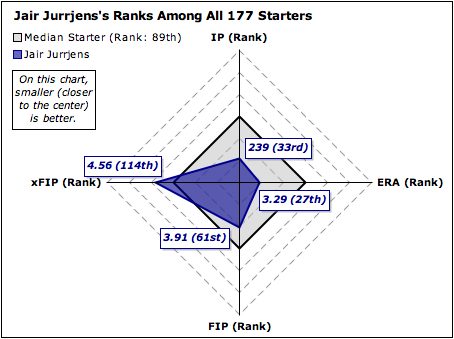 JJ's ERA and IP are indicative of a borderline #1 starter. His FIP is more like that of a borderline #2 starter, however, and his xFIP is that of a #4 starter. I'll let you guys decide which to place more credence in, but on average you'd have to say Jurrjens is a decent #2 starter. Now, Tommy Hanson: 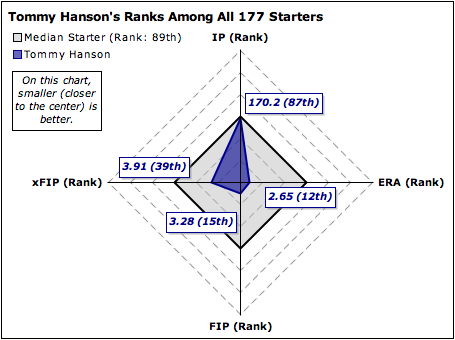 The only thing holding Tommy back from true acehood is his IP mark. As he develops and starts becoming more of a workhorse, he'll clearly be an ace--his ERA and FIP are #1 starter-worthy, and his xFIP is not far behind. Here's Derek Lowe's graph: 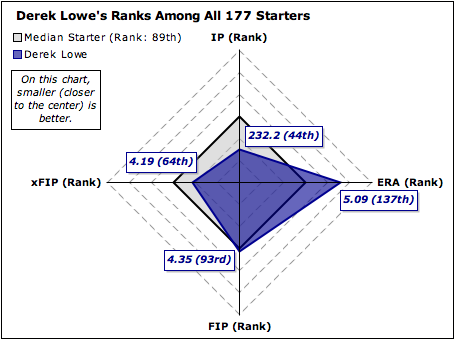 This is where it gets interesting. We all know about Lowe's crappy ERA with the Braves. But he has thrown a lot of innings (which has value) and his peripherals indicate that he's actually been a solid #3 starter. His xFIP is so good because he has had a great groundball rate. Speaking of GB pitchers, how about Tim Hudson? 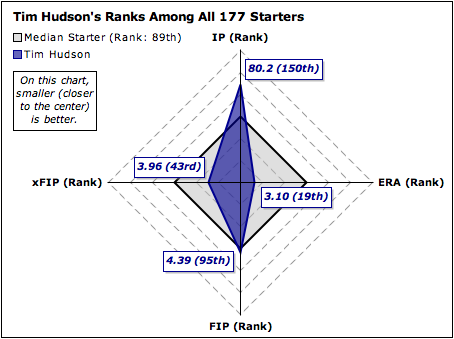 Hudson's IP ranking is low because of his injury (which makes sense, because an ace isn't much good if he's not healthy--see Webb, Brandon). Both ERA and xFIP think Hudson could be a #1 or #2 starter, but FIP thinks he's only a borderline #3 because of his low strikeout rates. Finally, here's Kawakami's graph: 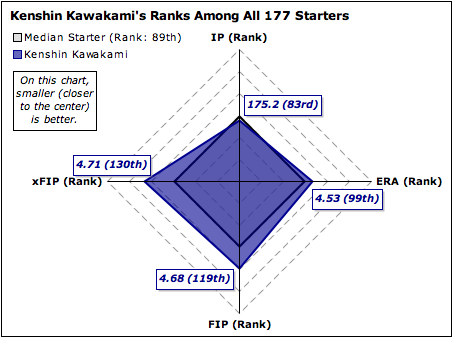 Kawakami has accrued a solid number of innings--equal to a #3 starter. His run-prevention stats are less flattering, but they still indicate a solid MLB pitcher. You may think that those rankings are not impressive, but remember that there are at least 150 starters in MLB at any given time. Even if you take the most pessimistic stat--his xFIP rank of #130--he is still clearly deserving of being an MLB starter. If you prefer ERA to the advanced metrics, KK is actually a very good #4 starter.

To do this, I took the average of each player's ERA, FIP, and xFIP as computed above. I call this stat RPA, or Run Prevention Average. I then calculated each pitcher's ranking in RPA and in Innings Pitched.

Here are the RPA ranks, IP ranks, and Rotation Scores of the Braves' pitchers:

According to this metric, Jurrjens and Hanson are average #2 starters and Lowe is an average #3. Hudson is a low-end #3 and Medlen is a #5. Kawakami, meanwhile, ranks as a very good #4 starter. Obviously, the trends are different for each player (JJ, Lowe, and KK seem to be getting worse while Tommy, Timmy, and Kris are improving) but as of right now, KK is inarguably a major-league-quality starter. Even if you ignore the IP ranking, his RPA rank of 115 would still identify him as a #4 starter (though he'd be borderline).

Step 3: Finding the Teams that KK Would Start For

Finally, I sorted the Rotation Scores by team and looked for teams that had 5 guys who are clearly better than Kenshin Kawakami. There were only 2 teams that clearly would not start Kawakami: the Rays (Shields, Garza, Niemann, Price, and Davis) and the Yankees (Sabathia, Vazquez, Burnett, Pettitte, and Hughes).

Two other teams might not start Kawakami. The Cubs have 5 guys rated higher (Dempster, Wells, Lilly, Zambrano, and Gorzelanny), but one of them (Carlos Zambrano) has been moved to the bullpen in favor of Carlos Silva, who is rated much lower than Kawakami. The Rockies, if all their starters are healthy, might also be able to trot out 5 guys better than KK (Jimenez, de la Rosa, Hammel, Chacin, and Cook).

The other 26 teams could all use the services of KK, though. In fact, some of them would downright LOVE to have him. For instance, Kawakami's Rotation Score would be the second-best on the Indians' staff, only a hair behind Justin Masterson's (Fausto Carmona is probably their best pitcher now, but he sucked so much last year that his score is still mediocre). At worst, Kawakami is a #3 starter on the Indians.

Finally, KK would be the 5th starter on 12 more teams (plus the Braves): A's, Brewers, Cardinals, Dodgers, Giants, Marlins, Padres, Phillies, Red Sox, Reds, Twins, and White Sox. The Twins might opt to go with Kevin Slowey (3.83) over KK for the 5th spot, so they are a borderline case. The others are more clear-cut.

I am sure that you could argue that the Braves should not have signed Kawakami, or that they should not have given him so much money, but I think you'd have a very hard time arguing that he doesn't belong as a major-league starter. At least for right now. If he continues to pitch poorly, these numbers could change quickly. I don't think that will happen, though. Based on his past performance, I would expect him to get it together before long.

It's worth noting that last year at this time Kawakami had a 5.73 ERA--exactly the same as his current ERA. From May 16th to the end of the season last year, his ERA was a sparkling 3.33. I think it's unlikely that he'll be quite that good for the rest of 2010, but I also think it's extremely likely that he will be much better than he has been so far.