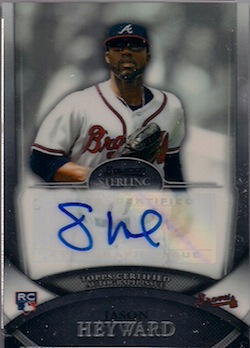 I was sitting in my rental car in the parking lot of a dry cleaner in Winter Haven, Florida listening to the game over the radio through the MLB app on my iPhone. There are those moments in your life where you just automatically remember where you were when some event occurred. For people of my parent’s generation, they remember where they were when JFK or MLK, Jr. was assassinated, for instance. While not as important in the grand scheme of things, the same can be said for major sporting events, especially those that concern your favorite team. We remember where we were when Sid slid. We remember where we were when the final out of the 1995 World Series was recorded. Those old enough can remember Hank Aaron hitting number 715. We can remember Jason Heyward’s first home run. 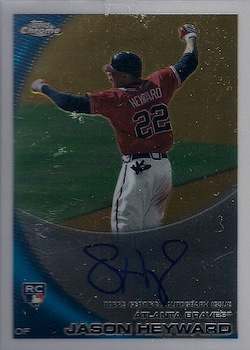 I was in the middle of a slow work day, and I knew that the Braves game was being broadcast on ESPN. Despite my near obsessive hatred of the network, I wanted to get off work a little early to catch the game. I was able to leave early, but not early enough to see the first pitch. At my desk, I listened as Derek Lowe gave up a three run homer to Marlon Byrd in the top of the first. As I headed out to my car, Lowe recorded the final out of the half inning. The Cubs had their ace, Carlos Zambrano, on the mound. I thought it was a terrible omen for the season.

In their first offensive turn at bat of the 2010 season, the Braves got going quick. Melky Cabrera worked a walk that was followed by a two strike single from Martin Prado. On the second pitch he saw, Chipper Jones blooped a single to center scoring Cabrera. As I pulled into the parking lot of the dry cleaners, McCann would also single to center loading the bases. There’s no way I was getting out of the car just yet.

Troy Glaus struck out swinging on three straight pitches, but Yunel Escobar, as he did throughout the 2009 season, came through with a clutch hit, yet another single to center, scoring Prado and Jones. (I was convinced that what we had just seen from Troy Glaus and Yunel Escobar was what we would see all season long. In one case, I was right.) The stage was set. Brian McCann stood on second and Escobar was on first as Jason Heyward headed to the plate for his first major league at-bat.

I assume there’s a psychology that goes into an individual deciding to dedicate a portion of his baseball card collection to a single player, but it escapes me. How does one choose a favorite player? Yes, it is often that you just choose one of the best players from your favorite team. Throughout the 80s, Dale Murphy was both my favorite player and the favorite of many throughout the country. The plethora of number 10 jerseys you see during any visit to Turner Field over the last decade and a half are a testament to the best player theory. Yes, great players are the favorites of many and, as would be expected, attract collectors in droves. (Two other types of players tend to attract the attention of player collectors: long time one team players and dirty, scrappy players.)

Prospects are a different story. Very few collector’s choose to dedicate a player collection to a prospect. Who wants to dedicate their money towards a player who may not pan out, especially when the top cards for top prospects tend to fetch outrageous prices? No, most of the people who purchase prospect cards are not collectors, rather, they are speculators. They buy prospect cards in great quantities and then, for those few that break big, they try and turn them over for a profit. (Considering the stunningly ridiculous prices that have been paid for Stephen Strasburg and Bryce Harper cards, I find it hard to believe these buyers will ever cash in on their “investment”.)

I’m not sure I’ve ever seen as much hype around a Braves prospect as that which surrounded Jason Heyward during Spring Training of 2010. Sure, Chipper Jones and Andruw Jones had been highly touted, but it was nothing like this. We had all marveled at Heyward’s meteoric rise through the farm system in 2009. We became giddy when hearing the story about his massive home run destroying the sunroof in assistant GM Bruce Manno’s car. When Bobby gave Heyward the job, we all jumped for joy.

Still, I don’t start a player collection for an unproven prospect. Show me something, then we’ll talk.

Through the radio broadcast, you could hear the fans that packed the Ted that day. It sounded like a post season game. Sure, many people need no reason other than “first game of the season” to show up at the ballpark. It was, however, obvious from the moment that Jason Heyward stepped to the plate just who the star attraction was that April day.

Right from the start, he displayed the patience that we had heard so much about. It would have been easy for a kid in his first at bat to be overly aggressive, looking to prove himself quickly to the home crowd. With the ease of a veteran though, Heyward took two quick balls from Zambrano. At some point, the crowd had started chanting his name. Zambrano readied the next pitch. I’ll never forget Jim Powell’s call.

Here it comes. Swing and a drive! High and deep to right field! It is way gone! Jason Heyward with a bomb into the Braves bullpen! It's 6 to 3 Atlanta! And this stadium is upside-down!

I still get goosebumps thinking about it. At the time though, I reacted differently. I began screaming and jumping up and down while sitting in the driver’s seat of my rented Chevy Malibu. A businessman exiting the dry cleaner saw me and must have thought I’d lost my mind. It was an electric moment, and even though I had missed seeing it, the image I had in my mind wasn’t even topped by the footage I saw later on replay.

When my work for the week was finished in Florida, I would fly home to Georgia as I did almost every week. The drive from the airport took at least an hour and I didn’t arrive home until it was near midnight. I went into the bedroom and kissed my sleeping wife on the forehead. I put my stuff away and immediately went upstairs and tracked down every Jason Heyward card I already had, all three of them. I pulled out an empty binder and put a few empty protective sheets in it. In the first sheet, I carefully placed the three cards. Using a silver Sharpie pen, I wrote Jason Heyward on the spine as carefully as I know how. I immediately let it be known to those I trade with that I would like any Jason Heyward card that could be found.