Share All sharing options for: Five to Collect: Dale Murphy

If you need any help looking for cards to chase for your favorite players, then Five to Collect is here to help. These aren’t necessarily the five best cards for a player. The list won’t always include a rookie card. The list is simply five cards that are interesting and show off both the best of the player and the best of baseball cards. 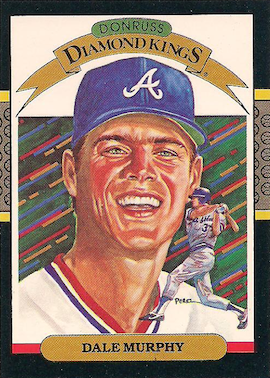 It’s hard to state just how important a figure Dale Murphy is for long time Braves fans. The Braves of the mid to late 1980s were not a good baseball team. Often, they didn’t even rise to the level of mediocrity. Still, no matter how poorly the team played, we had Dale Murphy. He was our All Star. He was our MVP. He was our Hall of Fame centerfielder. (That’s right, I said Hall of Fame centerfielder. I have no desire to engage in the debate, I simply want to state my opinion.) He was our Diamond King.

Starting in 1982, and for a number of years thereafter, Donruss reserved the first 26 cards of each base set for the Damond King subset. A player from each of the 26 teams was named the Diamond King for the year and artist George Perez would paint a picture of the player for the card. Donruss selected Dale Murphy for this honor twice: 1983 and 1987. I’ve selected the 1987 version here, and this is my favorite Dale Murphy baseball card.

Why is this my favorite? Well, for one thing, the 1987 Donruss set is one of the great sets of the 80s. The black bordered Donruss sets were beautiful, and the paintings on the Diamond King cards seem to pop right off the surface. It certainly doesn’t hurt that the artist, Perez, turned in one of his better jobs for Murph. His smile is captured perfectly. It looks exactly as many of us remember from his Kinnett Daires milk ads. How can you not love the inset picture of Murphy’s follow through, one of the iconic images of a Braves baseball player?

The card typically sells in the one dollar range on eBay. 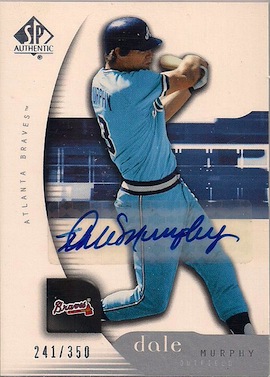 To recommend an autograph card, we have to look to sets that were sold after the completion of Murphy’s career. Murph has been a fairly prolific signer over the years, with the period between 2004 and 2005 being particularly fruitful. Many of his autographed cards have featured on-card signatures, but unfortunately, the majority are stickers, as they are on most cards. Many of his autographed cards include a piece of uniform or a piece of a game used bat. There are so many great examples that you may wonder why I chose to feature the auto I did.

Yes, I’m recommending a Murphy autograph card that has a sticker and does not include a relic. Why? The card is affordable. (Current eBay prices are in the 25 dollar range.) He is wearing the powder blue road uniforms from the 1980s Braves which is how many of us remember Murphy, especially when we stayed up late to see him play one of his frequent games against the teams on the west coast. Best of all, the picture is the patented Murph follow through. (Are you detecting a theme with these cards yet?)

These cards are serial numbered to 350 and there are usually one or two available on eBay at a time. 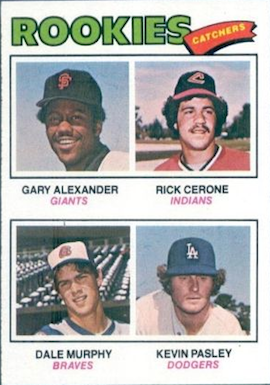 Two weeks ago I said that every Braves fan needed to own a vintage Hank Aaron baseball card. Well, let me add that every Braves fan should own a Dale Murphy rookie card. I can’t think of a better way to spend ten dollars of your hard earned money. The card is as under priced as the player is under valued by those that did not watch baseball in the 1980s.

Although Murphy wouldn’t be featured on his own card until the 1979 Topps issue, he did appear on a multi-player “rookies” card in 1977 and then again in 1978. Both cards are “Rookie Catchers” cards. Both include players who would play alongside Murph on the Braves. (Rick Cerone on the 1977 card and Ernie Whitt on the 1978 card.) You might think that the 1978 card is the better card since the other players pictured: Bo Diaz, Lance Parrish and Whitt would each have long careers, unlike Gary Alexander and Kevin Pasley pictured on the 1977 card. You’d be wrong. You should get Dale Murphy’s true rookie card. Even with a serviceable veteran that spent much of his career with the Yankees, like Cerone, Murphy is still clearly the main focus of the card. These days, it’s hard to know what to consider as a player’s true rookie card. In the days before rampant overproduction and numerous card manufacturers, it was easy. This is that card for Dale Murphy and this is the card you should own.

I assume most people know that Murphy started his career splitting time behind the plate and at first. It was Bobby Cox that moved him to the outfield in 1980 where he would immediately establish himself as an All Star. Within two years, he was winning gold gloves and MVPs. Definitely one of Cox’s best moves during his first stint with the Braves. 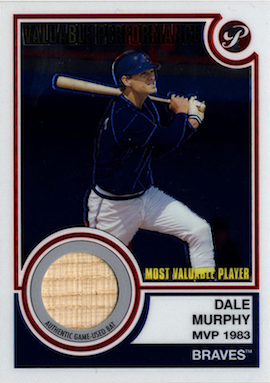 I’ve become so jaded on the subject of relic cards. The cards are everywhere. Many of the small blaster boxes in your retails store’s card section even include one by default. Thanks to the overproducton, your standard jersey or bat card has become so common as to lose all meaning. Even more frustrating, on those rare occasions that you get a relic card that would otherwise excite you (say, for example, a Josh Gibson relic from 2005 Bowman Heritage), and you see a piece of wood and you think you have a beautiful bat relic, you come to find out the relic is a piece of wood from a stadium seat and has only a tenuous relationship to the player pictured.

These days, the big thing in relics is patch cards. The parts of the uniform without a patch? No one needs those! People who pull patches go online and scream in all caps, “MOJO MOJO MOJO!!!”. Of course, now the manufacturers manufacture patches to include on the cards so, again, there’s no real relationship between relic and player. It has also become common place for scumbags to remove pieces of jersey from cards and switch them out with patches to try and make a quick buck off a sucker on eBay. So goes the hobby.

Here we have my favorite Dale Murphy relic card. The relic itself isn’t a disappointment since it contains a piece of wood from a game-used bat. The card is chrome and features the Murphy follow through. Better still, the cards in this set commemorate a player’s MVP year, and since the cards in the set feature the 1983 Topps design, Murphy’s card is extra special since he was the 1983 MVP. The card typically sells in the five to ten dollar range. They come and go on eBay. 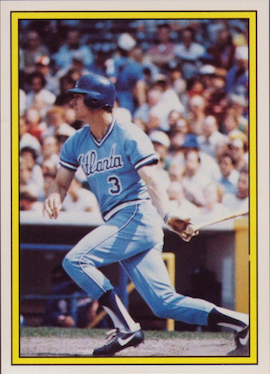 Unlike today, in the 1980s, baseball cards were popular to an irrational degree. People were buying cards in bulk thinking that they were investing to pay for the education of their children. New companies were starting up just to sell baseball cards. It seemed like every retail store on the planet had Topps or Fleer develop a 33 or 44 card set for them to sell. Topps also introduced a number of glossy sets. There were the All Star glossy cards that they inserted into rack packs, the glossy cards you had to order by mail and they would later introduce rookie glossy cards that were otherwise identical to the All Star cards, but inserted in different types of packs. Then, there are the oddball test issues.

The card you see pictured here is a blank back glossy card of Dale Murphy. I do not know how I ended up with this card. For the longest, I didn’t even know to which set the card belongs. It is similar in appearance to the Topps mail-in glossy cards, although it lacks the players name on the front. I had always assumed the card was issued by Topps, but I could never prove it. I can’t find the card in the Standard Catalog of Baseball Cards.

When I was going through my Murphy cards for this week’s post, I came across the card and my interest in it was rekindled. It is yet another shot of Murph’s follow through, which most long time fans would recognize, even in silhouette. The colors are vibrant thanks to the gloss. It’s just a beautiful card.

I did an eBay search on Dale Murphy glossy and I now have an idea of where the card is from. According to a recent search listing, the card was issued by KG in 1983 as a Topps test issue in the Michigan area. I have no idea who KG is. Searching the internet for 1983 KG Glossy, I was able to find a purported checklist for the set, but the checklist only includes 22 cards, and everywhere the Dale Murphy card is mentioned, it is listed as card 25 in the set. I think it’s likely the card will remain a mystery to me.

I wanted to avoid recommending a rare card, but when it looks this good, I can’t help myself. There’s one available on eBay right now, and looking through past listings, they don’t come around often.