Entering the 2011 season, Atlanta's acquisition of Dan Uggla from the Marlins looked to be exactly what the team needed; Uggla was the right-handed power bat the Braves didn't have in 2010. After all, Uggla was coming off a career year that saw him hit .285 with 33 home runs and 105 RBI. On top of that, he hit extremely well at Turner Field, posting a .354 avg. in 45 games. Two months after the trade in January 2011, Uggla signed a five-year deal worth $62 million. One concern regarding Uggla was his defense: he had committed 73 errors at second base in his five years with the Marlins.

Uggla was known for having a slow April (.248 avg. before 2011) and then heating up in May (.294 avg. before 2011), so when he finished April hitting only .194, it didn't come as a real big surprise. He started May on a tear, going 6-for-16 in his first four games, but inexplicably went cold: the rest of the month, Uggla was 10-for-84, had only one multi-hit game and only twice had hits in consecutive games. His .160/.241/.260 month of May was his worst of any month at the major-league level. Through May, Uggla was hitting .178 and didn't get any better in June, posting a .179 avg. By this point, some fans soured on Uggla to the point of booing him when he made an out while others saw it as him trying too hard to live up to his contract. However, no one questioned his hustle: he earned himself 21 infield hits during the season, some during a very improbable streak.

When July rolled around, Uggla was hitting .178 with 12 home runs and 28 RBI, obviously not the kind of numbers you pay someone $62 million to produce, but then something happened. Uggla was hitless on July 4, his average at .173. The next day, he had two hits and then had two more hits the day after that. Uggla hadn't had more than a six-game hitting streak all season, but he suddenly had an impressive streak running where he recorded a hit in every game for the rest of the month. Uggla ended July with a 22-game hitting streak during which he hit EIGHT home runs, having hit only 12 during the first three months combined. In doing so, he pushed his season average up to .206. 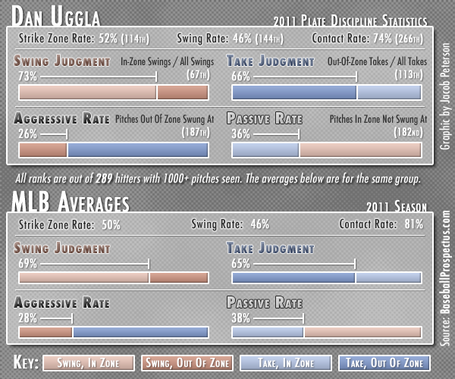 The streak continued into August as he threatened Rico Carty's 31-game streak in 1970 for the longest in Atlanta team history; Uggla surpassed that mark on August 12 with a two-homer game against the Cubs and added one more the next day for an extraordinary 33-game hitting streak. Uggla was threatening the Braves franchise record 37-game hitting streak set by Tommy Holmes in 1945 when he who shall not be named robbed him of a hit in his final at-bat August 14, ending the streak. Uggla had hits in the next three games, meaning he could've very well tied Holmes for the franchise record. His hitting streak also coincided with Freddie Freeman's own 20-game hitting streak. Together, Uggla and Freeman carried the offense through the summer.

Uggla cooled off in September, hitting only .238, but hit six home runs, giving him 36 for the year and setting a new personal high. As for his defense, Uggla committed 15 errors in 2011, which is about average for him, but that total was tied for the most by a second baseman and the second straight year he's led the league in that category.

Judging from his numbers, one could easily say Uggla had his worst season ever and that may be true: his batting average, OBP, slugging percentage, OPS and RBI were all the lowest in his six-year career. However, considering how much he struggled through the first half of the season, finishing with the numbers he accumulated may have made this season a success. We fans hope not to endure another first half from Dan Uggla ever again.