How The Braves' Jason Heyward Works The Count, Revisited

Share All sharing options for: How The Braves' Jason Heyward Works The Count, Revisited

Before the 2011 season started, I posted a graphical look at Jason Heyward's performance in each count. If you don't remember that, please go refresh your memory, as this post will make the most sense when compared to that one.

The infographic below offers the same information on Heyward's injury-and-slump-plagued 2011 season. As you might expect, this graphic shows quite a bit of dropoff from the 2010 version. The top part looks at Heyward's performance when putting the ball in play in different counts, while the bottom part focuses on the length of Heyward's plate appearances. 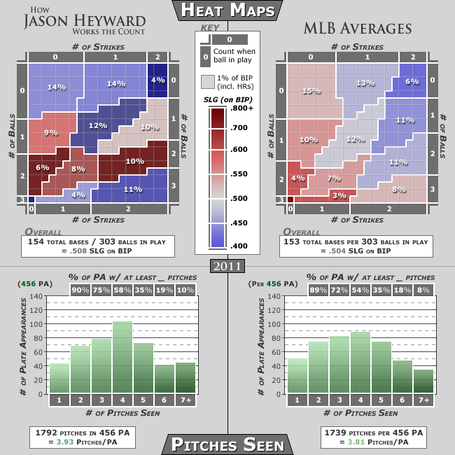 Overall, Heyward slugged just .508--roughly equal to the MLB average--on balls in play, including homers. This is down nearly 100 points from a stellar .602 mark in 2010. A large factor Heyward's precipitous drop in batting average on balls in play (BABIP) in 2011, a fall that I'd say is partly (but not entirely) due to bad luck.

The problem, then, wasn't an inability to get into advantageous counts, but rather a lack of success in those counts. Actually, Heyward's SLG on balls in play declined in 9 of the 11 counts (not counting 3-0, on which he has just 3 career balls in play). Most puzzling of all is Heyward's poor results in 3-ball counts. His SLG when making contact in 3-ball counts declined from .672 in 2010 to just .363 in 2011. That's just weird, and very likely to be simple bad luck.

Some of this decline was offset by Heyward's excellent results in 2-2 counts (an .800 SLG). Weirdly, he had 24 total bases in this count, by far the most of any count. By comparison, he had only 16 total bases in all 3-ball counts combined, with nearly twice the number of balls hit in play. Just as the poor 3-ball results are mostly due to bad luck, the good 2-2 results are mostly due to good luck. Good luck in 1 count, however, doesn't outweigh bad luck in many other counts.

Moving on to the bottom part of the graphic, we see that in 2011, Heyward was very slightly above-average in terms of working longer counts. He generally saw about a tenth of a pitch more per plate appearance than an average hitter. This, however, is a huge drop from 2010, when Heyward was one of the best hitters in baseball at working counts, seeing nearly a third of a pitch more per PA than the average hitter (4.14 Pitches/PA). In 2010, Heyward actually had a few more 5-pitch PAs than 4-pitch PAs, a very rare feat. This year, he dropped back to a much more normal proportion, with 31 fewer 5-pitch PAs.

In 2011, 35% of Heyward's PAs lasted at least 5 pitches, down from 42% in 2010. This suggests that Heyward lost one of the most extraordinary aspects of his hitting profile, the ability to work deep counts. Not every hitter needs to work lots of deep counts to be successful, but hitters who are as selective as Heyward generally do.

Let's all hope that with the help of a new hitting coach and an offseason of improvements, Heyward can get back to making pitchers work like he did in 2010. That alone won't make his production return to 2010 levels, but it should help. Combine that with some better luck and--hopefully--better health, and he'll really be back in business.