The Atlanta Braves entered the 2011 season with a boat load of confidence. Many of the experts were picking Atlanta as the team to give the Phillies a run for their money in the National League East. The Braves looked like a solid unit, with strength and depth at every position. The team had its swagger back, and a feeling like they were finally complete with the addition of the long sought after right handed bat of Dan Uggla.

But that was March...

April has been a different story for the Braves. It's been a story of long road trips and the absence of the flair for the dramatic that typified the 2010 team. There was a glimmer of that magic from last season in yesterday's game. The Braves staged one of those signature ninth inning rallies to take the lead, but the Dodgers had more magic left in them than Atlanta did. The Braves, and their fans, need to look at yesterday's game as a positive, a sign that maybe the comeback ability from last season is returning.

Braves fans started off this season with more confidence than they have started off with in either of the last two seasons. This year's opening confidence level of 85%, was higher than last year's (83%) or 2009 (76%). After a week of sustaining that confidence level, the number dropped precipitously to 66%, then rebounded slightly this week to its current 69%. If the Braves can't win the series against the Giants, then we could see the fan confidence level fall to possibly its lowest ever. On the other hand, maybe Atlanta can exact some measure of revenge against San Fran, and take this series. 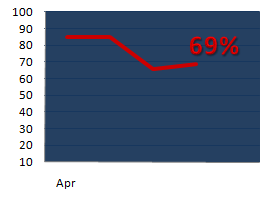