After a rough loss in thirteen innings the night before, the Braves left no doubt about tonight's game.

Jair Jurrjens recorded the first complete game of his career and allowed just two runs despite having to pitch out of the stretch for most of the night. He gave up nine hits to the weak Padres lineup and walked two batters, but managed to get out of multiple jams with clutch strikeouts and double plays. Aaron Harang, who was 4-0 entering Tuesday's game, ended up pitching six innings but was left on the mound simply because of a fatigued bullpen.

JJ did the Braves a huge favor by saving the bullpen after rigorous use the last few nights, and it was great to be able to give all of our guys a much needed rest.

For the second night in a row, the Braves hit a home run in the 1st inning. After a Jason Heyward walk, Chipper Jones put Atlanta up 2-0 with a monster home run to right-center field. With those two RBIs, Chipper tied Mickey Mantle for 2nd place all-time in RBIs by a switch hitter. That's pretty neat. David Ross followed up in the 2nd inning with a solo-home run to left field to give the Braves a 3-0 lead.

The Padres battled back in the 4th inning. After two quick outs, Jorge Cantu singled and was then driven in on a triple by Orlando Hudson. With a chance to continue the rally, Jurrjens got Brad Hawpe to weakly ground out to shortstop for the final out.

A few weeks ago I questioned why Fredi Gonzalez was not using David Ross. Tonight, we all saw just how good of a hitter he truly is. The last thing the Braves want to do is exhaust Brian McCann behind the plate and David Ross is more than capable of being a solid backup plan for Atlanta.

Jurrjens continued to hold the Padres scoreless until the 9th inning when a meaningless run scored on a fielders choice. Cameron Maybin tapped back to JJ and he flipped the ball to Freddie Freeman to record the final out of the game.

It was a fun night in San Diego after a tough loss last night. All the good stuff after the jump...

The Braves and Padres will conclude their series tomorrow afternoon at 3:35EST. It'll be the final game of the Braves 10-game west coast road trip, and a win puts the Braves above .500 on the trip and at .500 for the season. It'll be Tommy Hanson against Mat Latos. 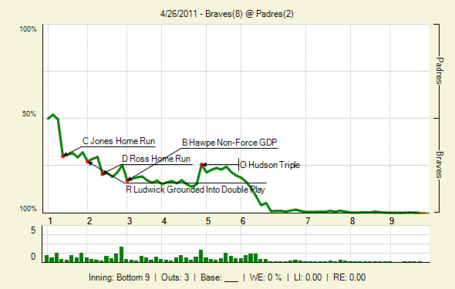 It's won before, but there were no other options tonight. This is just too good. Fat Dingflyer takes CotG tonight. David Ross takes Aaron Harang's dreams and turns them into nightmares.