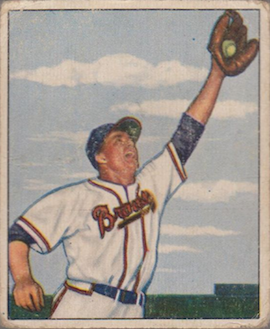 There was a time that it wasn’t hard to find a card show. I grew up in Columbus, GA, and even in a town our size, we had regular card shows. Most of the local shows were at Peachtree Mall, the most popular shopping destination in town. There were never more than a handful of dealers, but to the eyes of this young collector, there were so many wonderful cards to be had. I often found the shows overwhelming and wouldn’t know where to look first. Still, I would find something I wanted and would inevitably spend every dollar in my wallet.

It was a different time for sure. Even in a city the size of Columbus, there were several card shops throughout town. I’d go whenever I could persuade my Mom to take me. Sure, the owner had little interest in catering to a kid who wanted to look at everything. Still, even under the owner’s harsh stare, I could have spent hours flipping through every available card in the shop. My mother must have spent countless hours sitting in her car waiting for me to buy my cards so she could go home.

It was also a time where at any store with a magazine rack, you could find a magazine about baseball card collecting. The two I remember most are Baseball Cards and Sport’s Collector’s Digest, which is still in print today. Unlike the collecting magazines published today by Beckett, these weren’t glorified price guides where the editorial content was underwritten and often uninteresting. These magazines relished in telling stories of the history of baseball card collecting. They were an indispensable guide to the history of the hobby. 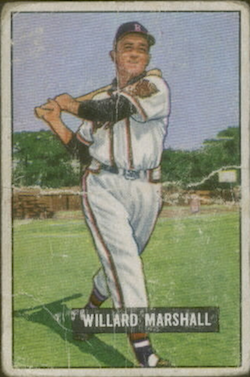 This was a time when baseball cards were everywhere. We didn’t need card shows, card shops or magazines for news about the latest sets. Topps, Fleer and Donruss released their sets at the beginning of the season. After the season was over, I could count on the Traded and Update sets appearing at the local card shop. Card collecting was easy. The most valuable service provided by the shows, and by the shops and by the magazines of the time was their window into vintage trading cards.

They were also out of my reach. For a young boy living on an allowance, or even on his meager hourly wage from working in the kitchen of a pizza joint, the cards were simply unobtainable. It was obvious that this young Braves fan wouldn’t be able to afford a Hank Aaron or an Eddie Mathews or a Warren Spahn card any time soon. It was just as unlikely that I would be able to get my hands on a Joe Adcock or a Lew Burdette. Of course, that didn’t stop the lust. 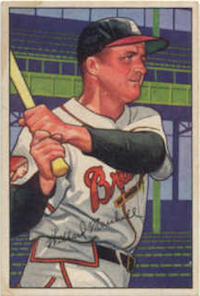 There was one card in particular at my favorite of the local card shops with which I had fallen in love. The card was almost shaped like a square. The colors were exaggerated, but accurate. I had no idea whether this was an actual photo or some sort of weird painting and photo combination. The left-handed pitcher pictured on the card was shown with his leg held high in a kick as he prepared to deliver a pitch to the plate. From the vantage point, you could even see the spikes on his shoe. The card was a 1950 Bowman Warren Spahn and I was obsessed with the card. I still don’t own it.

The set would become one of my favorites. I began to notice other cards from the set at card shows. Jackie Robinson was shown taking a practice swing as he approached home plate. Ted Williams appeared to be watching a pop up sail into the seats. Richie Ashburn was staring straight ahead, as if to let the pitcher know that the ball would not be thrown past him. Just like the Spahn, I would never own one of these cards.

Still, all hope wasn’t lost if you were a kid who fell in love with a vintage set. There was a secret weapon that allowed you to get a card from that set you craved. That weapon was “the box”. Every shop had one. Seemingly, every dealer at a card show had one as well. It was a box filled with cards from older sets. They were never cards of the star players. Truth be told, even the above average players couldn’t be found in the box. The box never held cards in mint condition. There was usually a price written on the outside of the box. It might be a dime or a nickel or a quarter. The box would be filled with vintage baseball cards.

When I first discovered and approached the box, I had one goal. I wanted a card featuring a Braves player from 1950 Bowman. How simple is that? At the time, it wasn’t quite as simple. There’s no telling the collecting gold I passed over looking for a simple 1950 Bowman Braves card. I suppose since this was Georgia, everyone else was after the Braves as well. I was on the hunt. It would take months, but I would finally get my card. 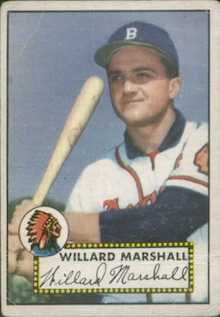 I don’t remember if I found the card at a card show or at the local card shop. I only remember pulling it from the box. I must have thumbed through hundreds of cards in that box before I found the card I wanted. It was, and is, beautiful. The player is depicted making a leaping grab of a line drive. The Braves logo on his uniform is prominent and gorgeous. The player is Willard Marshall. It was my first vintage baseball card and remains one of the most treasured possessions in my collection.

It isn’t as easy to find a card show in 2012, but when you do, you can still find the box. Almost every dealer at every table has one. The price has gone up to a dollar or more on most of the boxes. Still, they are filled with collecting gold and are reason enough to attend any card show.

Willard Marshall may not be a household name, but he had a respectable career and was a genuine American hero. After a rookie season with the New York Giants in 1942 that led to his selection as a reserve for the National League All-Star team, Marshall enlisted into the Marines. He would spend three years in the military and would serve in the Pacific during World War 2. He returned to the Giants in 1946 and would enter the most productive stretch of his career. In 1947, he would slug 36 home runs and have his career season, receiving another All-Star game selection and finishing in the MVP voting. His last year with the Giants was in 1949, and he would appear in his final All-Star game, as a starter no less, and would again appear in the MVP voting.

The Boston Braves would send Al Dark and Eddie Stanky to the Giants for a package of players that included Marshall. Marshall would prove a solid addition to the Boston Braves lineup, but he would never again match the success he had with the Giants. His most notable accomplishment with the Braves was starting 123 games in right field in 1951 without making a single error. The Braves would sell Marshall to the Reds early in the 1952 season and would end his career a few years later as a bit player for the Chicago White Sox. He would be pictured in a Braves uniform in cards from 1950, 1951 and 1952.