You've seen the prospect list. Are you ready to collect their cards?

Share All sharing options for: Collecting the Braves Top 25 Prospects (#25 through #11)

One of the highlights of the off season at Talking Chop is the Atlanta Braves Top 25 Minor League Prospects put together by cbwilk. As a collector, I like to take this list and go rookie card hunting. There was a time when a player’s first base Topps card was considered the ultimate rookie card. Times change though and Bowman is now the home of the rookie card. Of course, it isn’t just any Bowman card you need to have a player’s ultimate rookie card. If Bowman released an autographed version, then that’s the card to grab. Failing that, you go for a refractor, or maybe even a Bowman rainbow of parallels. Frankly, the autographed refractor is an even better, and more expensive, selection.

Interestingly enough, even though a Bowman card is generally the first national card released for most prospects, they almost never fit the official industry rules for a rookie card. In years past, Topps was able to include prospects in their Bowman sets without issue. In 2006, the MLBPA issued new rules that prevented manufacturers from including any player in a set until that player has actually been called up to the majors. Prospector collectors were concerned how this change would affect Bowman. Ultimately, it made very little difference as the prospects were included as an “insert” set rather than as a part of the main product. This leads to sets like this year’s 2012 Bowman Draft Picks and Prospects where you have a base set of 55 cards and an “insert” set of draft picks and prospects numbered to 165. Of course, the industry might get to say, “this is the rookie card”, but prospect collectors and others still seek out those first Bowman autographed cards.

I thought it might be fun to take a look at what Bowman and Topps prospect and minor league cards are out there for the Talking Chop Top 25 prospects. This week, we’ll look at numbers 25 through 11. Unfortunately, there are more than a few that either haven’t appeared on Topps’ or the infamous Bowman scout’s radar. Your best bet to find a card for these players is to track down the various minor league team sets or the sets put out directly by the various minor leagues. Personally, I know I need to make more of an effort to track down all of these sets each year. The players who don’t seem to have a Bowman or Topps card yet are: Aaron Northcraft (#25), Abraham Espinosa (#24), Luis Merejo (#23), Juan Jaime (#21), and Navery Moore (#16). 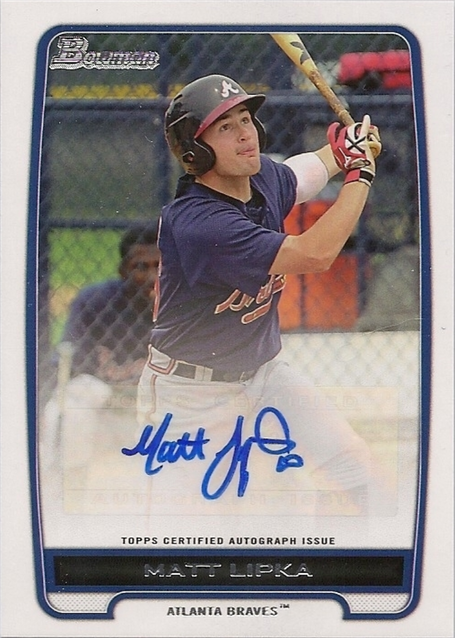 The Braves first round pick form 2010 has numerous cards available and seemingly signs for everyone. Typically, you can find his non-parallel autograph cards selling in the 5 to 10 dollar range, which makes him an easy pick up. If he makes the majors, even as a backup, the prices should tick up a bit. If I had to recommend a single Lipka auto card, I’d go with his 2012 Bowman card. The set is one of the better looking Bowman sets and Lipka’s card has a great shot. An even better potential bargain, if you can find one, just might be his Bowman AFLAC All-American card from 2009. These have been selling anywhere from 5 to 15 dollars. Any chance to get an AFLAC card of a potential Braves player is not to be missed. 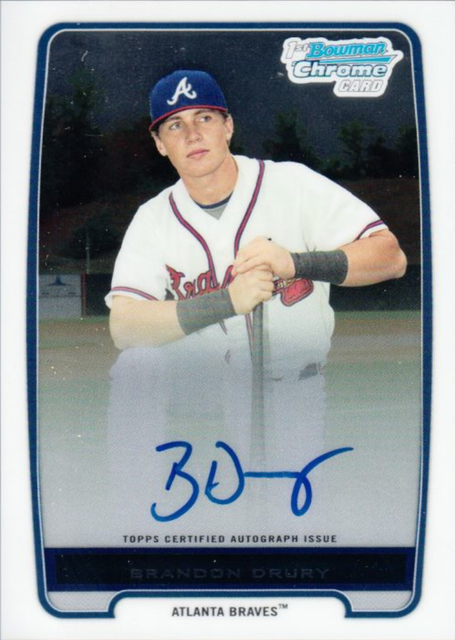 The Rome Braves’ Brandon Drury made his Bowman debut this year and his Bowman Chrome autograph is a beauty. It’s a must grab and can typically found for less than five dollars, including shipping. He also appeared in the Bowman Platinum set this year, although not as an autograph. He also appeared in last year’s Donruss Elite Extra Edition set, but personally, I avoid unlicensed cards. It features a great shot of Drury taking a throw at first, but has the typical unlicensed card crap, which in this case includes airbrushing the photo to remove the logo from his hat. 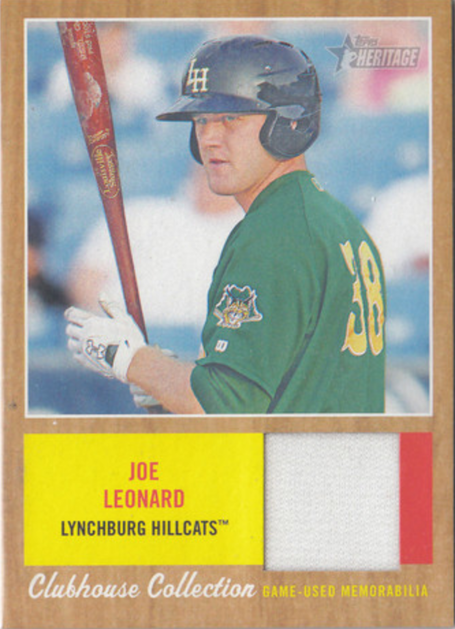 The Minor League Gold Glove winner was featured in both of Topps prominent minor league sets in 2011: Pro Debut and Minor League Heritage. Both cards are beautiful and worthy cards. Leonard has yet to be featured in a Bowman product or on an autograph card. I would, however, recommend his relic card from the 2011 Topps Minor League Heritage set. It’s not the most beautiful card, and relics are obnoxiously common these days, but anytime you get a card of a player in the Lynchburg green, you have to be happy. You can find it for around 5 dollars on eBay. 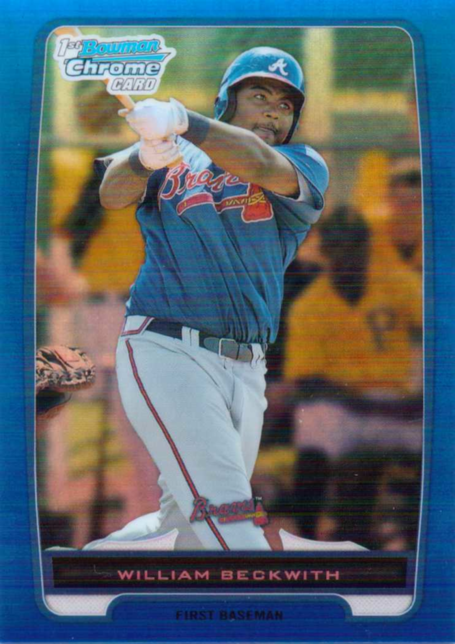 Beckwith attracted the attention of Topps this year and was included in the Bowman Chrome set. The picture is a great slugging shot. He also appeared in the 2011 Topps Pro Debut set, which features another great picture. Neither set included an autograph card. I’d recommend going for one of his parallel cards from this year’s Bowman set. The pictured blue refractor is serial numbered to just 250, but can be had for under 5 bucks. 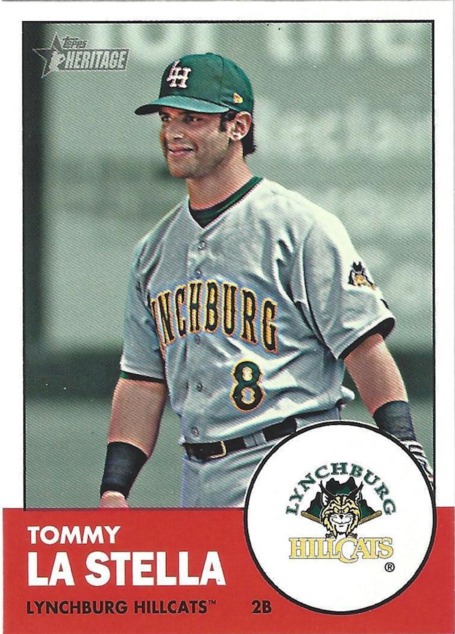 La Stella has been making a big impression with his bat. He’s also made an impression on Topps who included him in the 2012 Topps Minor League Heritage set. Although I don’t collect them, Topps does a great job with their minor league sets and the inclusion of all the great minor league uniforms and team logos are great. It can never be said enough how awesome the Lynchburg Hillcats uniform is. If La Stella keeps hitting well, look for him to pop up in Bowman soon. 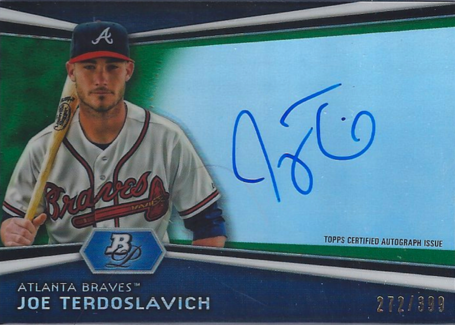 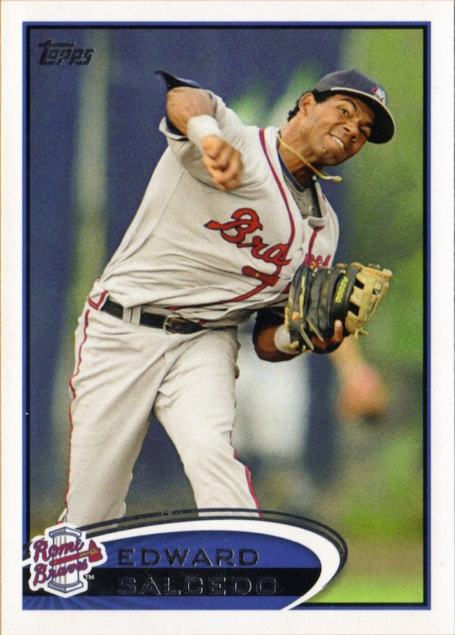 To date, Salcedo has only signed for Onyx and Leaf, which is a darn shame. Salcedo has a beautiful flowing signature, and if he lives up to his potential, I doubt he’ll be able to continue signing in this fashion. The demands for his signature will require him to tighten it up and shorten it. I don’t recommend unlicensed cards though so we have to look at Topps. They haven’t included him in any of the Bowman products so far, but Topps has been including him in their minor league sets from the last two seasons. His best card is the pictured 2012 Topps Pro Debut card. I find it amazing that Topps is able to include photography this amazing in a minor league set. (Perhaps, if I want a pure set building collecting experience, I should start collecting Pro Debut?) 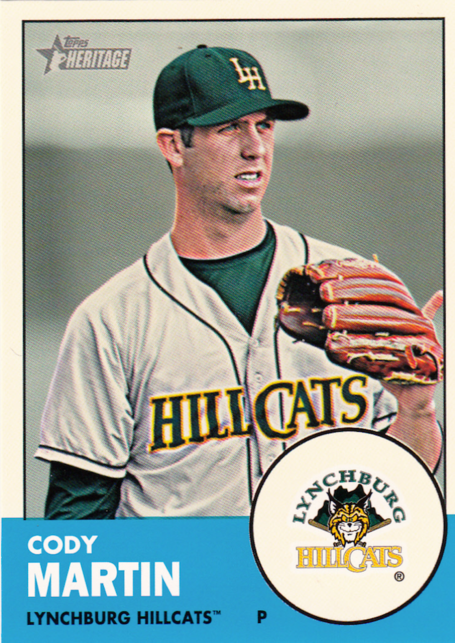 Martin has earned plenty of notice thanks to his cutter and his fastball. He appeared on Topps radar this year and was featured in both of the 2012 minor league products. There’s no Bowman card yet, and no autograph, but both of his minor league cards are pretty great. I’ll go with his Minor League Heritage card over his Pro Debut card. Why? The Lynchburg green. Again. 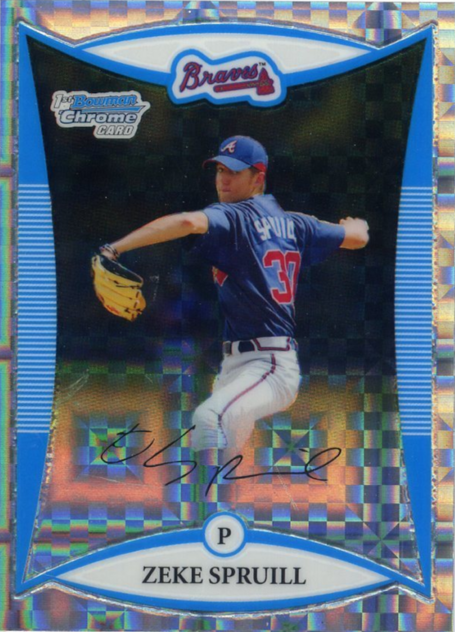 Zeke Spruill landed on Topps radar in 2008 and was featured on his first Bowman card. He has not, unfortunately, had a single Topps or Bowman card released since. As Spruill continues to grind it out in the minors and as he continues to move steadily towards Atlanta, I hope Topps will include him again soon. His 2008 Bowman card did not include an autograph, but his X-Fractor parallel can be had for just over 5 dollars. 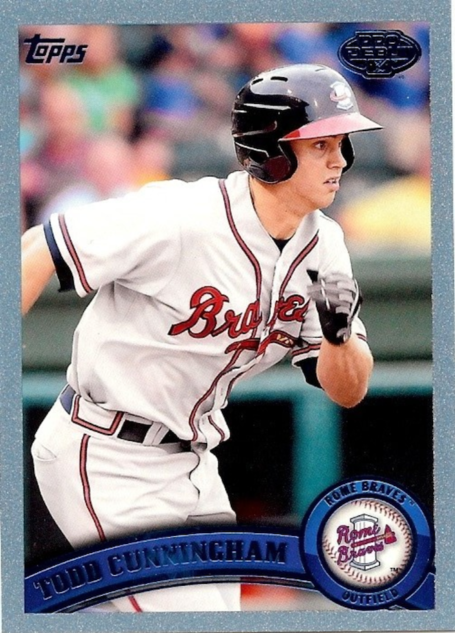 Cunningham may end up starting the 2012 season in Gwinnett, but he hasn’t gotten Topps' attention much yet. He appeared in the 2011 Topps Pro Debut with the pictured Rome Braves card. It’s certainly a nice card, even if Cunningham doesn’t look a day over 12 years old. You would think a guy who just missed out on winning a AA batting title would have gotten a bit more love from Topps. Hopefully, Topps will give him his Bowman debut in 2013. For now, pick up his blue parallel card from 2011 Topps Pro Debut for a buck or two and marvel at how someone who looks that young gets to play baseball for a living.