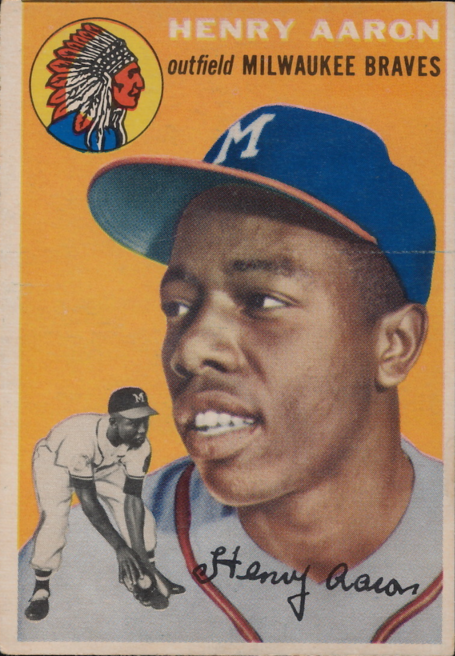 The 1954 Hank Aaron is the greatest of all the Braves baseball cards. It’s the rookie card of the greatest player to ever wear the Braves uniform. The card is from one of the greatest sets ever released, the gorgeous 1954 Topps set. (The 1952 set might be the most iconic of all the Topps sets, but compare any card from that set to a card from this set and marvel at the difference.) The card is a beautiful, nearly perfect example from the set. The portrait of Aaron as a young man is flawless. The inset black and white action photograph is a perfect counterpoint to the colored photo. The old Milwaukee Braves logo is the icing on the cake. The card is simply unforgettable.

Prices vary wildly on the card. I’ve seen the card in very poor condition sell for just a few hundred dollars. There are nice looking better condition versions available for anywhere from five-hundred to a thousand dollars. If money is no object, you can gan probably find a near mint version for a few thousand. Really, as far as rookie cards of the all-time greats go, the Aaron is reasonably priced.

This card is my great white whale and I’ve written here before that I doubt I will ever own the card. I no longer believe this to be true though. When I think of all the cash I’ve marked for baseball card purchases that I’ll save by not buying any new cards in 2013, I start salivating. The only obstacle standing in my way is my own self-control. As long as I can refrain from purchasing (many) new cards, then this time next year, I should own the most desirable of all Braves cards. 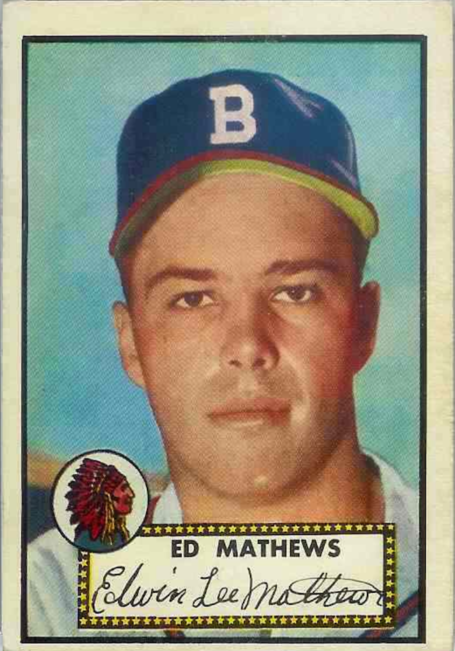 Here’s a first tip if you want to acquire Eddie Mathews’ rookie card: search eBay for Ed Mathews, not Eddie Mathews. Here’s another tip: bring a lot of cash. The Eddie Mathews card isn’t just in the high number series of the 1952 Topps set, it is the very last card in the set. The card is rare to start with and it is even rarer to find the card in presentable condition. Many of the cards that exist have been warped by the rubber bands that kid collectors used to wrap stacks of cards. Since many of the kids kept the cards in numerical order, the Mathews card was on the back of the stack and would often take the damage when stored. Currently, there are less than ten listed on eBay, and they are all price over twelve-hundred dollars. All of the listed cards have been graded and all have scored a five or less. Each costs thousands of dollars.

Like the 1954 Aaron, the 1952 Mathews is one of the great Braves cards. It suffers from all of the flaws inherent to the 1952 set. The hand colored photograph of Mathews is weak. The colors are a little off on the Boston Braves cap, and for some reason, the cap isn’t really sitting on Mathews head. (In fact, it makes Mathews’ forehead look like its 12 inches high. The box with the name and signature looks somewhat sloppy, as it does on all the 1952 cards. Still, it’s the 1952 Topps set and Eddie Mathews is the second greatest slugger in Braves history. 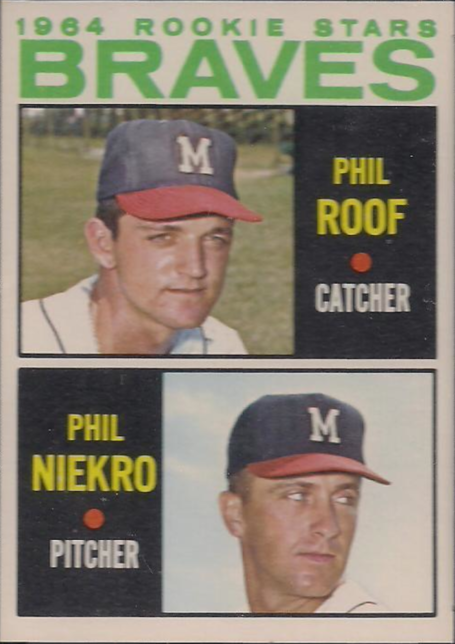 Over the years, Topps created two different types of multi-player rookie cards. Some years, Topps would group players from different teams who played the same position onto a single card. Other years, Topps would simply group players from the same team onto a card. Personally, I prefer the team approach. What does this mean? Well, it means that instead of the Phil Niekro rookie card being “contaminated” by players form another team, its contaminated by a fellow Braves player. Well, to call Phil Roof a Braves player is overly generous. He played an inning for Milwaukee in 1961 and then six innings in 1964. He would then embark on a solid major league career as a journeyman catcher. Phil Niekro would go on to become the greatest knuckleball pitcher in the history of the game. Knucksie retains his popularity among Braves fans to this day and his rookie card is a must purchase. Best of all, the Niekro rookie is affordable and can often be found for under a hundred dollars on eBay. (Phil Niekro would be featured again on a multi-player rookie card in 1965, this time with Clay Carroll.) 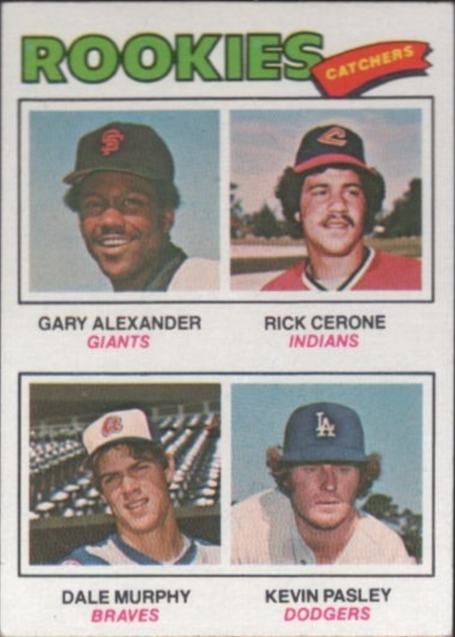 Phil Niekro isn’t the only Braves great to be featured on multi-player rookie cards two consecutive years. Topps included Dale Murphy on multi-team rookie catcher cards in both 1977 and 1978. Murphy’s true rookie card, the 1977 card, is a great card for several reasons. For one thing, I love that it includes a future Braves player in Rick Cerone wearing the hideous 1970s Cleveland Indians uniform. Better yet is the picture of Murph. Anyone like myself who became a Braves fan in the 1980s admired Murphy. Part of his appeal was always his boyish charm. Here, he looks like an actual boy. Without a baseball card, it would be hard for me to imagine Murphy as a boy.

Dale Murphy’s kids are currently working hard to get their father elected into the Hall of Fame. Their efforts have been generating a lot of press and I’d like to think that it has led to increased interest in Murphy’s rookie card. Unfortunately, that isn’t the case. Murphy’s rookie card was once one of the most sought after cards in the hobby. Now, anyone can find it for five to ten dollars. That might not be good news for anyone who bought up a ton of Murphy cards in the 1980s, but it is good news for any Braves fan looking to add a Murphy card to their personal collection. 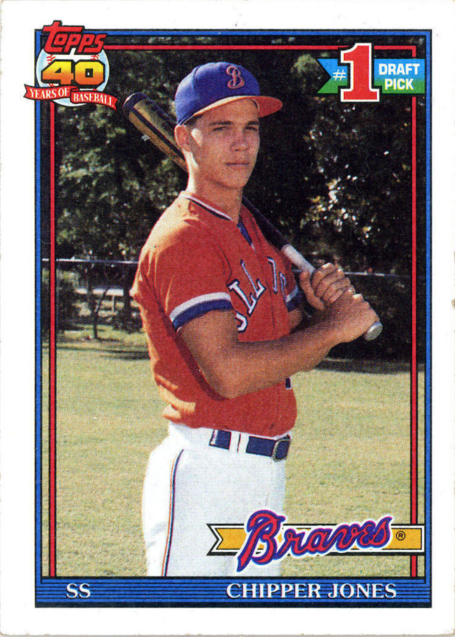 Chipper Jones will be a first ballot Hall of Fame inductee. He is the second greatest offensive player in Atlanta Braves history. He’s clearly the most popular Braves player of the post-Dale Murphy era. He is arguably the second greatest third baseman in baseball history. All that, and you can still get his rookie card for a buck or two. This is the reality of the junk wax era. Topps produced a lot of baseball cards in the late 1980s and early 1990s. By a lot, I mean you can still buy them by the case for far less than a penny a card. Thousands of people bought up the cards at the time thinking they were “investing”. It wasn’t unheard of for someone in 1991 to acquire hundreds of Chipper Jones cards and save them with the intention of selling them one day to put their kid through college. If you collected for any reason other than love of the hobby in the late 1980s or early 1990s, you came away disappointed.

The Chipper rookie will never be worth the same money as the Aaron or Mathews card. That doesn’t mean it isn’t a great baseball card. That doesn’t mean that every Braves and Chipper Jones fan shouldn’t own this card. It’s Chipper Jones first Topps card, showing him as the first draft pick, in his high school uniform. The only thing the card lacks is monetary value. Is that really important?