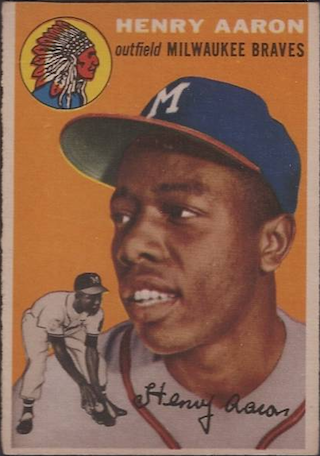 The T206 Honus Wagner is a beautiful card, but I do not desire it. If I were to see it in a museum, I would certainly ooh and ah, but even if my financial situation made the acquisition possible, I would not pull the trigger. Although Wagner is certainly one of the great players in the history of the sport, he is also a Pittsburgh Pirate, so he doesn’t rate as a favorite. Besides, I could find better ways to spend a million dollars.

What about the 1952 Topps Mickey Mantle? It is certainly the most iconic card in the modern era of card collecting. Mantle himself remains one of baseball’s most enduring icons. If you are willing to accept a card that looks like it was wadded up and kept is some kids pocket for the better part of two decades, you could even get one for around five-thousand dollars. If it were within my means, I’d grab this card in a heartbeat. Of course, Mantle was a Yankee, and I’m a Braves fan, which means I won’t likely save up five-thousand dollars to acquire a Mantle card. It isn't a card I dream of owning. Besides, I think the 1952 Topps design is overrated.

Every collector has their white whale. For a certain type of collector, that whale is the T206 Wagner or the 52 Topps Mantle. It might also be the 1933 Goudey Babe Ruth. Some have set their sites on slightly more modest cards like a 1963 Topps Pete Rose or the 1955 Topps Sandy Koufax. These days, many collectors have no interest in vintage cards, and their white whales are rare cards released in modern products. A good many collectors dream of landing the 2001 Bowman Chrome Albert Pujols auto. Some want to land that Bowman Chrome Stephen Strasburg auto. Last year, collectors were paying top dollar for boxes hoping to pull a Bryce Harper. A collector’s whale could also be simple like the one collector I know who’s looking to acquire every single card featuring C.C. Sabathia in a Brewers uniform.

I say it again, every collector has their white whale. For me, that card is the 1954 Hank Aaron.

Whenever I dream of the one single card I would like to add to my collection more than any other, I picture the 54 Aaron. Whenever I think of the one card that I would love to shove into the face of every visitor to my house, it’s the 54 Aaron. It is the rookie card of the single greatest player in the history of my favorite team. It is the single most important card issued of any Atlanta Braves player. It is from one of the most beautiful sets that Topps has ever produced. It is perfect in each and every way. It is my white whale. 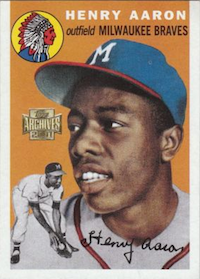 I’ve tried owning substitute versions of the card, but they haven’t it done for me. A reprint of the card was issued in the 2001 Topps Archives product. The card is very nice, but there are two things about the card that prevent me from suspending my belief and accepting the card as a substantial substitute for the original. The first flaw is a blemished front with the gold foil Archives logo. The second flaw is the size of the card. The Archives card is featured in the standard size of the modern baseball card rather than the slightly larger size used in the pre-1957 Topps cards. Of course, I didn’t really expect the Archives card to replace the original. (Another collector has tried the same trick with a chrome reprint from 2000.)

My other substitute for an actual 54 Topps Aaron is a curiosity that was inserted into cases of the 1989 Topps Traded set. The card is a bronze replica of the Hammer’s fabled rookie card. It is a gorgeous specimen in its own right. I’m proud to call it a part of my collection. I still yearn for the real thing.

There isn’t a week that goes by where I don’t log onto eBay looking at the available 1954 Hank Aaron baseball cards. I admire each one in order, lamenting the prices which leave the cards out of my reach. I sort the listings with the highest priced cards at the top and scroll down slowly. To lessen possible distractions, I filter the listings of all reprint cards. Each time I check I hope to see a card with a Buy It Now listing with even a semi-reasonable price attached. Each time I check I end up disappointed at the thousands of dollars it would take to make one mine. 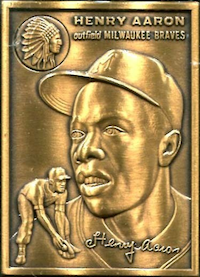 Once, I caught a listing when it was first listed. The card was graded by PSA with a grade of 2, which marks the card as being in good condition, which means not very good. The corners were rounded. There was a crease that seemed to perfectly separate the small image of Aaron fielding from the larger portrait of his face. There was some type of stain on the back. Naturally, I fell in love with the card and I wanted it immensely. I placed the initial bid on the card for just a hundred dollars and a few cents and hoped for the best. Six days later, I was shocked to find that, with just a little under an hour left in the bidding process, I was in the lead. Had I found an Aaron that had somehow managed to slip past the other collectors on eBay? I went ahead and upped my bid from a hundred dollars to just over two-hundred dollars. I then watched in dismay as, with just six minutes remaining on the auction, the card was bid up into the six-hundred dollar range. I could have cried.

In Herman Melville’s Moby Dick, Captain Ahab was out for revenge against the great white whale that had stolen his leg. After a grueling hunt, Ahab would finally hit and injure Moby Dick with his harpoon but the rope wrapped around his neck as it unfurled. The wounded whale would dive deep into the ocean taking Ahab with him. If I let it, the 1954 Topps Hank Aaron could become my Moby Dick, and like Captain Ahab, I could allow my obsession with this card to ruin me. I could forgo a mortgage payment. I could skip out on a few other bills. If I were willing to acquire the card at any cost, if I were willing to say, “consequences be damned,” the card would be mine.

Alas, I am not. Instead, at least once, every single week, I will check eBay and hope against hope that the card of my dreams somehow falls through a crack, and I can acquire it at a price I can live with. I accept that this outcome isn’t likely. The chance that I will ever own the 1954 Topps Hank Aaron is so small that it might as well be nonexistent. Still, as a collector, I will dream.