On Records, Sam Jethroe and his Bowman Baseball Cards of the Early 1950s

Share All sharing options for: On Records, Sam Jethroe and his Bowman Baseball Cards of the Early 1950s 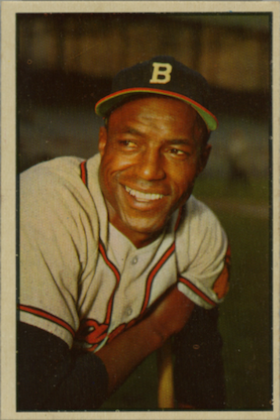 How important are records to the game of baseball? I would say, to most fans, they are very important. How else, then, would you explain the rage exhibited by so many fans at the thought of a "cheater" like Barry Bonds eclipsing Hank Aaron’s home run record? To myself, and a great many baseball fans across the country, Hank Aaron remains the "Home Run King". Everything we hold dear about baseball has been called into question by the use of performance enhancing drugs. Can we believe any record set in the past 20 years? Then, you have the bizarre double standard that affects players like Fred McGriff. The "Crime Dog" receives almost no support for the Hall of Fame. He is often dinged for having numbers inferior to certain contemporaries who are believed to have juiced. Yet, those same players receive little to no support for the Hall because they juiced. Such is baseball in the era of performance enhancing drugs.

On the other hand, are these records really as sacrosanct as we baseball fans want to believe? Jackie Robinson broke the color barrier in 1947 and it was many years after that before baseball could truly be considered integrated. There are many things that can be said about the game before 1947, but one thing we know for sure is this: Major League Baseball did not feature the best players on the game. It very well may have featured most of the best players in the game, but it did not include them all. What does this mean for those numbers that meant so much for so long? Specifically, I’m thinking of Babe Ruth’s 714 home runs, Ty Cobb’s 4,191 hits and Walter Johnson’s 3,509 strikeouts.

I’m not looking to call into question the greatness of Ruth, Cobb or the Big Train. I think we can say with a great deal of certainty that they would have been among the best of the best even if the game was integrated. That being said, as young players, Babe Ruth and Ty Cobb did not have to hit against "Smokey" Joe Williams. At no point in their career, did they have to face Satchel Paige or "Bullet" Joe Rogan, at least not in anything other than an exhibition. What of Walter Johnson and all of the other great pitchers of the early years of MLB? They never had to strike out Josh Gibson. They never had Cool Papa Bell, Turkey Stearnes or Oscar Charleston step into the box against them.

The exclusion of black players from Major League Baseball had an undeniable impact on the record book. Would the numbers of the great players have been as high had they faced the best in the world, regardless of race? Perhaps a player of color would have eclipsed the numbers of Cobb or Johnson or maybe even Ruth. That uncertainty is one of the great crimes of segregated baseball. 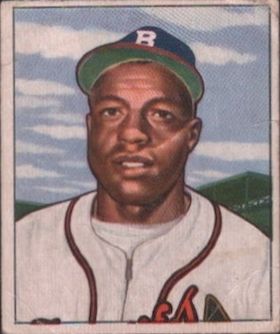 Of course, I’m not going to compare the impact on the record book to the impact on the lives of black players who were looking to move into MLB. When the Pirates attempted to sign the great Josh Gibson, they were blocked by commissioner Kennesaw Mountain Landis. His exclusion left Gibson a justifiably bitter man. He wasn’t the only one. One only has to look at Twitter or many of the prominent baseball blogs each year to see many grumble about the continued recognition of Jackie Robinson and the impact his signing by the Dodgers had on baseball. If you don’t get it, if you don’t get why it was so important and why it continues to be so important, they you simply haven’t looked hard enough.

On April 16, 1945, three black players participated in a try out at Fenway Park for the Boston Red Sox. The Red Sox had attempted to get out of the tryout, but pressured by a city councilman and the press, they had little choice but to go through with it. That day, a few Red Sox coaches put Jackie Robinson, Marvin Williams and Sam Jethroe through their paces. It is impossible to know for sure, but the tryout appeared to be merely for show. The Red Sox never contacted any of the three again and would not place a black man on their roster until 1959, twelve years after Jackie Robinson won Rookie of the Year for the Brooklyn Dodgers.

After Jackie Robinson’s successful debut with the Dodgers, Sam Jethroe signed, and like Robinson before him, played with the team’s AAA affiliate, the Montreal Royals. In a half season in 1948, he played well and followed up with a tremendous 1949 campaign that included a .923 OPS and a stunning 89 stolen bases. If he had played this well in AAA ball just ten years later, he would have been promoted, but that time hadn’t arrived yet. He had, however, attracted the attention of the Boston Braves who traded for Jethroe after the conclusion of the 1949 season.

On April 18, 1950, the Boston Braves put a black man on the field for the first time. Sam Jethroe hit second that day, and had the type of debut about which most players can only dream. In his first at-bat, he struck out and two innings later he would walk in his second. In the fifth, Jethroe would record both his first major league hit and RBI when he singled in Warren Spahn. Two batters later, Jethroe would score his first big league run on a Bob Elliott homer. After another strikeout in the sixth, Jethroe would make a bigger impression in the 8th when he belted the ball deep into the right field stands. There was certainly a lot of pressure on the men who integrated baseball to play well, and from day one, Sam Jethroe performed on the field. 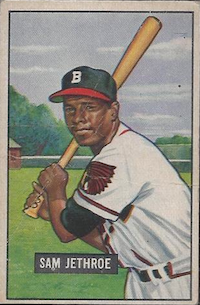 During his rookie season of 1950, Sam Jethroe’s official age was listed as 33, but there were rumors that it was higher. It was of no matter when he, like Robinson before him, won the Rookie of the Year award. Even with the listed age of 32, Jethroe remains the oldest player to have won the award. While it’s a nice accomplishment, it also reminds us that he spent many of his best playing years excluded from a major league roster for nothing but the color of his skin.

In 1951, Jethroe would better his rookie season slightly. For the second straight year, he led the National League in stolen bases, showing why he was nicknamed “The Jet”. Unfortunately, he struggled at the plate in 1952. The Braves moved from Boston to Milwaukee to start the 1953 season, but Sam Jethroe would never wear the Milwaukee Braves uniform. He spent the 1953 season playing AAA ball in Toledo where he put up an impressive .994 OPS. In fact, he played well enough that you would think he would have gotten a chance to play in Milwaukee, but that didn’t happen. He was traded to the Pirates after the season, and would appear in two games for the Pirates, with only a single plate appearance to show for it. From Pittsburgh, he made his way to Toronto where he would finish off his career playing AAA ball for the Maple Leafs, his numbers declining each year as he succumbed to the age induced deterioration of his skills.

From the first half of the 20th century, there’s no shortage of black players that we are forced to ask “What if?” when considering their careers. What if Sam Jethroe has been allowed to ply his skills at the big league level from his youngest days? What if the Braves had given him another chance in 1953? What if the Pirates had given him a legitimate chance in 1954? Those questions are simply unanswerable. Still, he made his mark breaking the color barrier for the Braves franchise setting the stage for Henry Aaron, Wes Covington and others. (Many years later, Jethroe would play a major role in helping many former Negro League players with short MLB careers get pensions.) 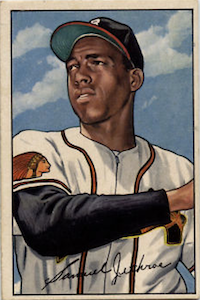 Jethroe passed away in June of 2001 with his role in Braves history secure, if somewhat unheralded. He felt, and it was certainly true, that he had given far more to baseball than it had given to him. His place in the history of the franchise should not be diminished or minimized. I would like to see the Braves do more to honor the player and his place in the history of the team and the game.

Sam Jethroe was featured in each of the Bowman sets from 1950 − 1953 and each of his cards are nearly perfect examples of the cards from those sets. The nearly square 1950 card only has room for a headshot. His 1951 card shows the switch-hitting Jethroe holding the bat cross-handed, although I have no idea if he actually hit that way. On his 1952 card, the picture is a close up of his left handed stance, and it also appears that he is holding the bat cross-handed, but we can’t tell for sure since his hands aren’t shown. Each of these cards are black and white photographs that have been painted for color.

Each of these cards are nice, but pale when compared to his 1953 Bowman Color card. This was the first set to feature full-color photography and it remains a stunner to this day. His smile is utterly infectious in the picture. 1953 Bowman Color is one of those rare sets without flaw. A mid-grade version of Jethroe’s card will set you back around ten to fifteen dollars on eBay. His earlier Bowman cards should cost you around the same.

For auto collectors, I have found but a single autograph card distributed by a major manufacturer. His auto card was released in 2001 as a part of the Fleer Greats of the Games set. While Jethroe’s autograph is nice, especially considering his age when he signed, the card itself is boring. It’s a shame that Fleer put almost no effort into the auto cards from this set. I’ve seen these priced from fifteen dollars to as high as fifty dollars on eBay. 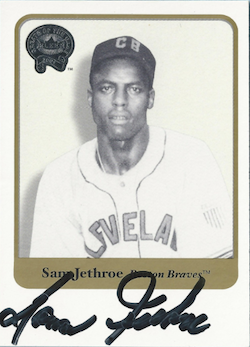