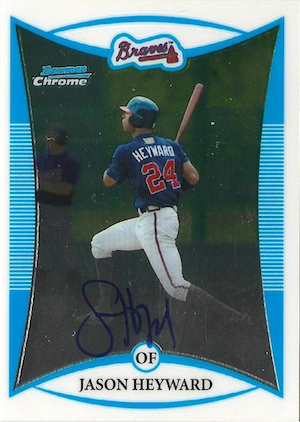 As I was reading Scott Coleman’s excellent piece on Jason Heyward’s emergence as the next face of the Atlanta Braves franchise, I was inspired to revisit my Heyward collection and to consider exactly why he has emerged as my favorite player in baseball. It certainly seems like an easy question to answer. He’s been touted as the future of the franchise and his number 22 jerseys have become almost as common a sight on the backs of fans at Turner Field as number 10 jerseys. I don’t believe it has anything to do with bandwagon jumping.

Certainly, from the start, I wanted to be a Jason Heyward fan. Our excitement built as Heyward began his rapid ascent through the Braves farm system in 2009, when he jumped from high A ball, to AA to AAA in what was seemingly the blink of an eye. Our anticipation peaked during spring training of 2010. The stories of his epic home runs denting cars in the Disney parking lot were earning headlines throughout the country. Even though most of us expected him to start the season in Gwinnett, we rejoiced when Bobby Cox and Frank Wren decided he was ready and put him on the roster.

When he made his regular season debut for the Braves, the crowd was stoked. That April afternoon against the Cubs saw Turner Field packed. From the start, there was a buzz around the stadium and when the kid stepped up to the plate for the first time, the fans were already chanting his name. Perhaps there are a few Braves fans who are so hardened and resistant to hype that they rebelled against this instant star making. There was certainly the makings of a backlash. I think that even the frozen, hardened hearts of these fans melted a bit when Heyward crushed that Carlos Zambrano pitch deep to right field in his first at-bat. It was one of those moments that no fan could ever forget and while it might fall behind Hank Aaron’s 715th home run or David Justice’s game 6 home run from the 1995 World Series in importance, it still stands out as one of the great homers in the history of the franchise.

At this point, like much of Atlanta, I was hooked. Despite a nagging injury caused by a hard head-first slide into third, Heyward had as dominating a rookie season as you can imagine, and he did it at the age of 20. He was snubbed hard in Rookie of the Year voting, which is not to say Buster Posey didn’t have a great year or isn’t a great player. He did have a great rookie year, and like Heyward, he looks like he’s taking his first steps towards superstardom this season. No matter, the five-tool Heyward was clearly the better player in 2010 and the voters messed up. It’s hard to imagine anything more that Heyward could do to endear himself to Braves fans.

Still, at this point, it was hard for me to think of him as my favorite player. I love (almost) all of the Braves and it was just too early for me to single out this talented kid as my favorite. His 2011 season was rough. Despite a hot start, including seven April home runs, he cooled fast and eventually spent time on the disabled list. It’s clear to me now that he was struggling to get past his injury, but at times, it was painful to see him at the plate last year. Those weak ground balls to second were especially disheartening. Heyward was still working hard and he did what he could with the glove and on the base paths. There’s no way to really spin his 2011 numbers as anything other than a massive disappointment for fans and for himself.

It’s hard to put into words just how great Jason Heyward has been in 2012. The word you hear to describe the guy most often is "beast", and that’s as fitting and as accurate a description as you will find. The traditional stat line is merely very good at .278/.352/.503, although, it is on the rise. 23 home runs is nice, but it isn’t going to challenge for the home run championship. His 68 RBI total would certainly be higher if he had spent the entire season hitting in the 3 spot with Martin Prado and Michael Bourn in front of him. The thing to remember though is that these numbers can only give you a partial picture of Heyward’s greatness. His offense has been very good this year, but it’s the other aspects of his game that make him among the best players in the game.

If you take a look at his defense, you see a young man who has been the best defensive right fielder in baseball this year. (Yes, I remember him losing those two balls in the lights recently, but he’s still in front, and it really isn’t close.) Before yesterday’s game, his UZR was an impressive 16.8. Because Jason Heyward is in right field, Braves pitchers have given up less runs than they would have otherwise and a run saved is every bit as good as a run scored. (There has been, incidentally, one outfielder to put up a higher UZR this season at 17.2. That number belongs to Heyward’s teammate in center, Michael Bourn. Martin Prado ranks seventh in UZR among outfielders. The Braves outfield has been rather amazing defensively this year, but I digress.)

Perhaps the most overlooked aspect of his game is his base running. Look, I know that every Braves fan knows how much fun it is to watch J-Hey attack the base paths. I don’t think everyone knows that the effect his base running has on his team can be quantified. (Thanks again to Scott Coleman for pointing me to a statistic, UBR, that I’ve never noticed before.) Basically, the stat UBR, which stands for Ultimate Base Running and is listed as BsR on FanGraphs stat pages, is used to determine the value a player contributes to his team on the base paths. It isn’t about stolen bases, but instead, it looks at how often a player takes an extra base, or scores from first, and compares that to league averages to come up with a value. Jason Heyward isn’t just leading the league in this stat, he’s lapping the field. His current rating is 6.3 and the next closest players, Dexter Fowler and Alejandro De Aza, come in at 4.7. We’ve all thought that Jason Heyward is the best base runner we’ve seen. As it turns out, we have a number we can use to prove it.

Right now, there’s a little over a month left in the baseball season. With a current fWAR of 5.8, Heyward has shown himself to be the sixth most valuable player in all of baseball. Right in front of our eyes, Jason Heyward is starting to live up to every expectation that has been placed upon him. Watching him day in and day out this year, there’s now little doubt that he’s my favorite player. I love to watch him run down a fly ball in the gap. I love to watch him motor from first to third on a single. I love to watch him sprint around the bases after a home run. I love to watch him find that extra gear when trying to leg out an infield hit. Heyward gets a lot of criticism in a lot of corners every time he comes up short. The kid can handle it. Get used to it Braves fans, our 23 year old right fielder is already one of the best players in the game.

With his 2011 performance starting to look like a distant memory, his card values have rebounded and it’s getting harder and harder to find good deals on his signed cards, not to mention on his relics. The best value remains his 2011 Topps Chrome card which can typically be found in a Buy it Now auction on eBay for around 25 dollars. Most of his autographed cards sell in the 23 to 35 dollar range, but the prices for his serial numbered auto cards tend to vary widely. You can find them as low as 25 bucks, but many of them go for a lot more than that.

The single most important card of Heyward’s that you can own is his first signed Bowman Chrome card. That card comes form the 2008 set and I’ve seen auctions end as low as 55 dollars, but that’s not typical. The auctions usually go in the 65 − 80 dollar range. The card is expensive already, but considering the career to which Heyward appears destined, it may be a value. All those 30 dollar autographs certainly are.

At the end of last season, I took a look at Jason Heyward one Sunday and came with the conclusion that I had faith in the player. It’s true that I started filling my Jason Heyward binder during his first week in the big leagues when I decided I was going to be a Heyward collector. I now have almost 200 of his cards and I’m no longer simply a guy who collects Heyward or is a fan of Jason Heyward. He’s my favorite player and he’s showing right now that he has what it takes to be a great. The next few years are going to be amazing to watch.