The Braves will now play in the very heart of Braves Country.

Let's be honest here: attendance at Turner Field has stunk over the years.

Sure, the Braves can bring in 50,000 a couple times each season for Opening Day or a number retirement, but the fact is that for being in such a gigantic metro area, having 15,000 people in the stands on Monday night is a joke.

Ticket revenue is a huge driving force behind how much money a team can spend each year. With the Braves' decision to leave Turner Field for Cobb County in 2017, check out this ticket sales map from 2012: 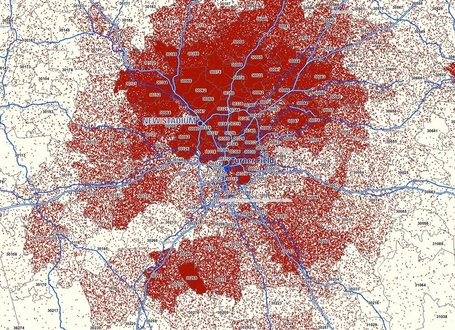 It's worth noting that the Braves released this -- so the numbers may not be 100 percent accurate -- but most feel it's a pretty legitimate representation of who goes to games in the Atlanta area.

Does this mean there will be 45,000 at every game beginning in 2017? Of course not. But if that ticket map is any kind of indication, the Braves should see a noticeable spike in attendance as they move into their new digs in a couple years. That means more money to spend on the team each year; who doesn't want that?