If you buy something from an SB Nation link, Vox Media may earn a commission. See our ethics statement.

I don't have time to fully break down the details, so mostly I'll just post the document given by Cobb County: 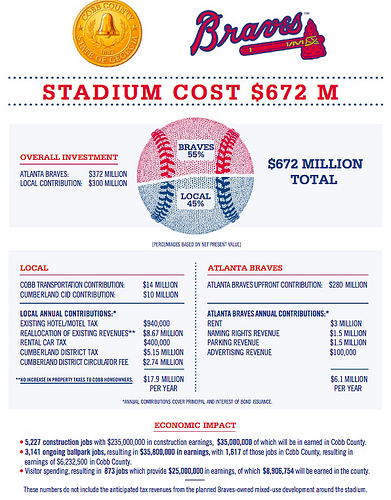 Interesting numbers, as it seems that the Braves are trading off paying more money upfront on the deal, but will be making a boatload off the deal annually, while Cobb County bears the brunt of the cost on an annual basis. It seems as though Cobb will be banking that high taxes in the CID will not drive those wanting to develop in the area away. Also interesting is the $9 Million per year in reallocation of existing revenues.

It's also important to remember that these figures represent proposed figures, and they have no yet actually been approved, though by all indications, it seems as though they'll just be rubber stamped when the official vote happens. They will not go in front of Cobb County voters in a referendum.

We will break these numbers down further as the story evolves.

Here is a link to a zoomable version of the .pdf

Here is the rest of the document, with more details in following pages. (H/T to reader mateoloco for the link viafield of schemes)