So you want to go see an Atlanta Braves Spring Training game at Disney's Wide World of Sports? Seeing a game there is quite fun, but the real fun and experience of Spring Training is all the other stuff that the complex has to offer. If you're not already a full-on Braves junkie, you will be after a trip to the Braves Spring complex using these tips.

Seeing a game at the WWOS is pretty straight forward, it's like any other modern Spring Training stadium -- small and intimate, but still a rather predictable experience. The ticket buying process is similar to the regular season, you can purchase on-line or at the box office. Many of the spring games actually sell out, especially when they play other popular teams like the Cardinals or Yankees, so if those teams are in town, make sure you buy tickets ahead of time.

But just "seeing" a game is not really the full Spring Training experience. Hidden behind the outfield, beyond the knowledge of most fans, is an intimacy with the game of baseball that many fans rarely get.

First off you'll need some supplies. Make sure you have plenty of water, maybe a little snack, good walking shoes, and suntan lotion -- you don't want your neck to get too red. If you want autographs, then you'll also need to pack plenty of pens or Sharpies and pristine baseballs or bats or other paraphernalia to get signed. Next you'll need to know where to go. Examine the map below (click on it for a bigger version), and keep it handy for reference. 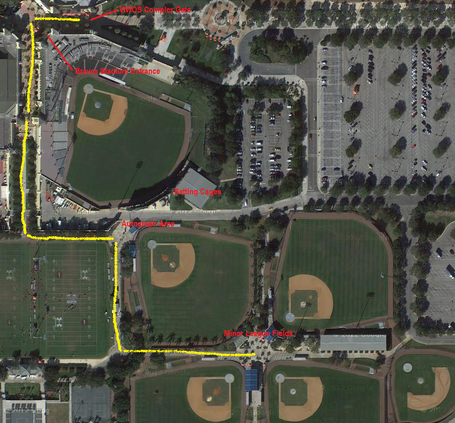 When entering the stadium you will first go through the WWOS Complex Gate, then to get into Champions Stadium you would enter the gate labeled Braves Stadium Entrance (above) with your ticket. But you're not going into the stadium just yet. Your mission is to arrive several hours before the 1pm game time. You will go past the stadium entrance, follow the yellow path on the map and explore the back fields.

The first back field you get to has a great autograph area. I've marked this on the map, and you'll likely see a bunch of fans waiting along the fence for autographs (see photo below). Players and coaches have to enter and exit this way to go from their car to the clubhouse, and many will usually stop awhile to sign for the fans who are there. 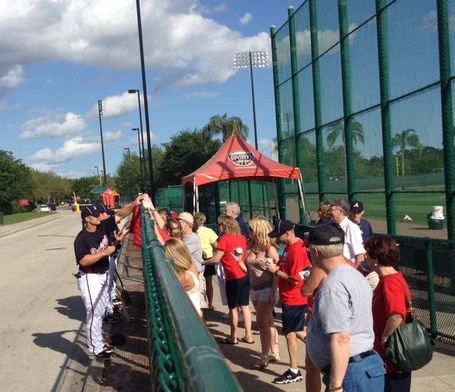 This first field is also where the Major League players do a bunch of their extra work. I've seen guys working on hitting back here, I've seen pitchers throwing simulated games, and everything in between. You can get to within several feet of the field, and you can usually even walk down the right field line and poke your head in through the open gates along the fence. I had a great conversation with Tommy Hanson last year while he was shagging fly balls in the outfield. 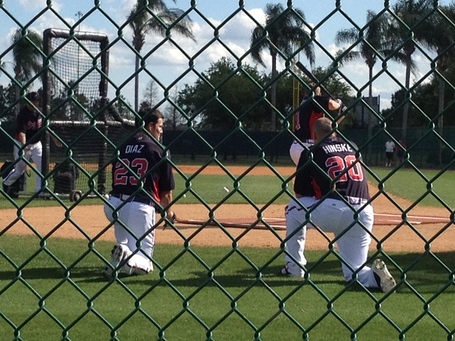 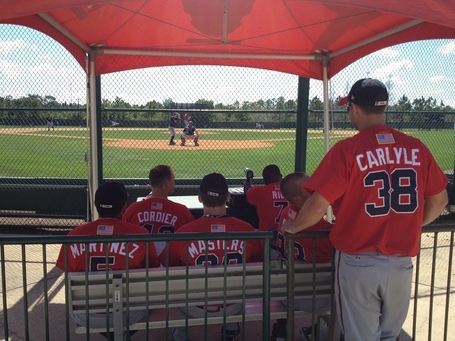 This area is also a great place to get autographs of the up-and-coming Braves players. If you are so inclined, the minor league guys will usually chat you up if you engage them in conversation when they're not busy on the field. If nothing else it's an interesting experience to walk around and check out all the baseball activity that these guys are going through, as it's something most fans don't usually get to see. 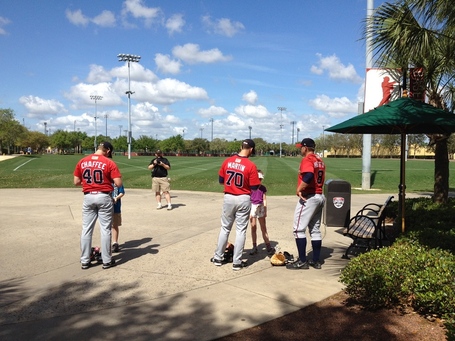 The back fields can also see plenty of Major League cameos. Bobby Cox will probably be rolling around in his golf cart. Frank Wren and John Schuerholz are likely to pop in from time to time. Whenever there is a special instructor in Major League camp, they also hang out in minor league camp for a while.

You can see some pretty cool random things if you're lucky. Last year I saw almost all of the Major League pitchers taking infield practice just for fun on one of the back fields. Roger McDowell was hitting them grounds and fly balls. They were laughing and joking and carrying on, and doing their best Major League shortstop impression as they fielded grounders up the middle.

You won't always get to see cool stuff like that, but there are bound to be some memorable moments. You'll be amazed at how much access you'll actually have among all the players, and you'll probably come away with a dozen stories to tell your friends. You can also meet other great hard core Braves fans back there. Several years ago I met some loser named CB (who will probably be really upset that I'm giving away all these secrets).

Even if there is no Braves home game on a particular day, there is still likely to be a lot of activity on those back fields. You can buy a ticket at the WWOS box office that gives you access to the whole complex for a day. If it's March, then the minor leaguers are usually in camp. Get there around 9 or 10 in the morning, buy your ticket, follow the yellow path to the back fields and see what's going on. If it's past the mid-point of March, then minor league games will usually be going on, starting around 1pm. You can sit in the bleachers back there and watch a game or two or three.

When you're on those back fields remember that the players and coaches are there doing their job, so don't interrupt them while they're working or on the fields. You can usually catch them for autographs as they're headed back to the clubhouse (they follow the same yellow path), and most of them are usually happy to sign autographs for you if they have the time -- players in the Braves organization are great about that. But remember to respect their space, we don't want the Braves to react to poor conduct by a few fans by shutting down access for everyone.

If you have any other helpful tips or Spring Training complex secrets, please share them in the comments section. And when you get back from your spring training trip, make sure you put up a FanPost and tell us about your experience and share with us your pictures.