Share All sharing options for: Evan Gattis Named National League Rookie of the Month for April

Gattis, or as most people would prefer to refer to him as, El Oso Blanco, has seen his popularity rise to cult status over the past two months. First capturing everyone's attention in Spring Training, then making all of baseball stand up and take notice with his powerful swing and majestic home runs.

Little did many Braves fans know before spring training started that we would be treated to such an unimaginable story and so many special moments. Little did we know that in Gattis we would have the early season leader in the Rookie of the Year race.

We'll have to see where the Braves can find playing time for Gattis once Brian McCann returns in the next few days. Certainly they can't demote a guy just after he was named the best rookie in April. At the same time where can they find playing time for him? The team has been reluctant to move Justin Upton from left field to right field, but to get the most potent bats in the lineup they may have to shift Justin to right until Jason Heyward returns, and put Gattis in left.

We'll see. In the meantime #VoteForOso. 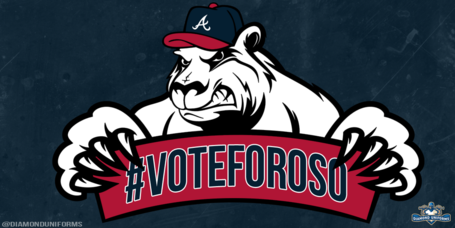