Dillon Gee takes on Tim Hudson in the series opener.

Share All sharing options for: Game Thread 6/17: Mets at Braves

***Update: The game is in a rain delay, and the Braves have to yet to announce a new start time. Stay tuned***

First pitch between the Mets and Braves is set for 7:10 PM EDT on SportSouth. Lineups: 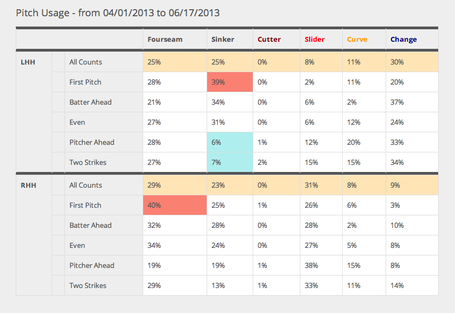 (Pitch F/X info courtesy of BrooksBaseball.)
Gee doesn't throw hard, with his fastball averaging just under 90 miles per hour this season. His changeup, slider, and curve all have whiff/swing rates of above 25%, with his slider leading the way at over 28%.
He has been better than his 4.84 ERA indicates, as evidenced by his 4.14 FIP and 3.85 xFIP. He's striking out almost 20% of batters faced while walking just over 6%. The main concern for Gee has to be a large drop in groundball rate from 50.3% last season to 43.6% this year. That decrease has coincided with a slight increase in line drive rate and a 5% rise in his fly ball rate against opposing hitters.