Throwback Thursday: That time when the Braves and Padres had a mini-riot in 1984

Our first of what should be many official trips back to the past takes us to the dark ages of the '80s, when the Atlanta Braves, San Diego Padres, Braves fans, and Atlanta police all got involved in one of the biggest brawls in baseball history

Share All sharing options for: Throwback Thursday: That time when the Braves and Padres had a mini-riot in 1984

Ah, the 1980's. The time of music that tried too hard to sound futuristic, fashion that looked like something you'd see in an episode of The Jetsons, and the decade where this guy won a Super Bowl. What a fun time to be alive -- unless you were a Braves fan, then the Summer was mostly a time of misery and sadness because the team didn't do much winning in the '80s. In fact, the team only had 2 winning seasons and only 1 divisional title in the entire decade, and 1984 wasn't one of them. In fact, 1984 was sort of familiar to 2014 for the Braves: Not much offense (their run production fell off a cliff compared to the 1983 squad), and they finished a few games under .500 and a distant 2nd place. If a Braves fan fell into a coma after the 1984 season and woke up recently, they'd probably want to go back to sleep because they'd figure that nothing had changed.

However, August 12th, 1984 ended up being anything but a typical day at Atlanta-Fulton County Stadium. For starters, the Braves won so that made it a special day in the '80s since that was a relatively rare occurrence, but what happened during the game made the result nearly inconsequential. The 1st place Padres came into town in their funky brown-and-gold uniforms with hopes to bury the Braves 10+ games deep in the NL West (as an aside, remember when the Braves played in the Western Division? Good Lord, what an archaic time). They didn't accomplish that (though they did eventually end up winning the West with no problem and eventually made it to the World Series), but they did end up making history by participating in one of the most infamous brawls in the long history of Major League Baseball.

The game itself started off on the wrong foot (or right foot, if you're here solely to enjoy the fisticuffs), as Braves starter Pascual Perez drilled Padres lead-off man Alan Wiggins right in the back in the top of the 1st. Since those cosmic "Unwritten Rules" were still in the process of being written at the time (just as they are now), the Padres decided that they wouldn't get revenge by beaning the Braves' best player (Dale Murphy, who deserved better. Not just in this game, but in his entire Braves career. The Murph Dog deserved better.). Instead, the Padres decided to get back at the source, so they decided to try to bean Perez not just for his next at-bat, but for the rest of the entire game.

Here's the result of the first time the Padres threw at Perez, which came in the 2nd inning. They missed him, but the tone had been set, and at this point, Pascual Perez was 'bout that life. 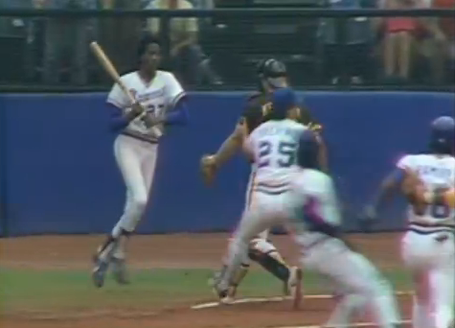 Perez had a couple of great seasons as a pitcher for the Braves, but he was never a good hitter. With that being said, he looked like he was ready to go Babe Ruth on the next Padre that stepped to him. But that was the extent of the drama at that point. The benches cleared, there was a little pushing and shoving, but nothing crazy had happened. At least not yet.

The 4th inning arrived, Perez came back up to bat, and like clockwork, Padres pitcher Ed Whitson threw a heater aimed for Perez's ribcage. With the all of the grace of a gazelle in the wild, Perez avoided the projectile, and we got our first two ejections of the game as both Whitson and the manager, Dick Williams got the hook. The Padres were down 2 members of their team, also down by 3 runs, and had failed on their first 2 attempts to plunk Perez.

The 3rd attempt on Pascual Perez's midsection came in the 6th inning, which is when Greg Booker tried his luck. Again, Perez used his lithe frame to avoid the beanball, but Booker and acting- Padres manager Ozzie Virgil both received trips to the showers. However, that was after the first brawl of the game broke out. I haven't found the video of the fight that took place in this inning, but most reports around the internet tend to indicate that it was a garden variety baseball fight (unlike the next 2 [yes, 2] fights that had yet to happen on this day). Meanwhile, the Padres wouldn't get another chance at vengeance until the bottom half of the 8th.

In that fateful 8th inning, Perez came up to bat once again. By this point, the game was well in hand for the Braves and Perez was pitching a beauty in the midst of all the heated tensions. All of that beauty went out of the window in this inning, which is when Craig Lefferts succeeded where the 3 previous Padres pitchers had failed: He finally beaned Perez, and plunked him right on the elbow. That touched off Brawl #2, which was A) by far the nastiest of the day's brawls and B) one where full video evidence of the entire fight still exists!

During all of the hullabaloo, it's interesting to note that both Lefferts and Perez had moved out of the way. It's especially hilarious because back in the 2nd inning, Pascual Perez was ready to bop someone with his bat, but now he's decided that he wants no parts of this thing. Maybe it was because he had Typical 80s Villain Champ Summers barreling down on him, ready to throw hands. Seriously, look at this dude: 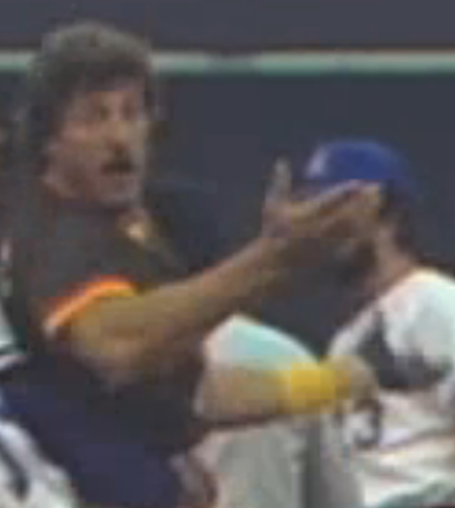 He looks like he's ready to go back to San Diego so that he can hatch a plan to tear down the youth rec center for at-risk kids so that he can build a mini-mall on top of it. Yes, I'm judging a guy from 30 years ago based on a grainy still taken from a video, and I feel absolutely no regret about the matter.

Anyways, while it seemed like Perez was through with the trifles of fisticuffs, Ol' Champ wasn't, and he sprinted to the Braves dugout in an attempt to flat-out get Perez. He was cut off at the entrance to the dugout by the lavishly coiffed Bob Horner (who was on the DL!), and that's when 2 fans decided that enough was enough and they took this opportunity to attack Summers. This led to the players on both teams banding together to get the idiots off of the field so that they could go back to being idiots, themselves. It was complete chaos. Once the smoke cleared, both the Padres and Braves sustained multiple ejections, and there were 2 fans taken from stadium in handcuffs. Amazingly, this was not the end!

The top of the 9th came along and the Braves decided that it was their turn for beanball revenge. Donnie Moore drilled the first batter he saw right in the back. That batter was Graig Nettles. In the featured video above, you can see Nettles do a bit of a spin after he got drilled. I'd like to think that he was using that pirouette to contemplate whether or not he'd kick off Round 3. Either way, he made the decision to charge the mound. As you can see, this was not a wise decision for Graig Nettles to make. 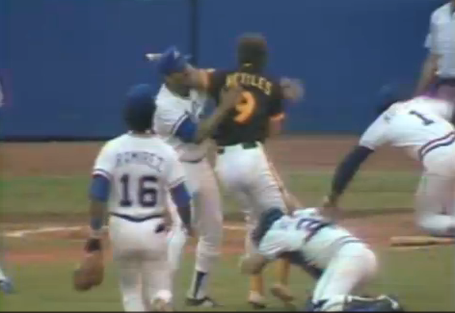 Round 3 of this now-legendary brawl almost spilled into the stands, which is when the gloriously-named Kurt Bevacqua tried to enter the stands to fight some fans who had slung beer on him. This was after Bevacqua stormed the field throwing haymakers left and right as if he were Bane in "The Dark Knight Rises." Clearly this wonderfully-named Padre was all the way turnt up for this one. Fortunately, that was the last of the fighting, as the game ended shortly after that, The Braves ended up winning 5-1, but I'm pretty sure that not a single soul cared about the result of the game after that harrowing experience.

As dumb as I find beanball and "unwritten rules" to be, I can't lie: This. Was. Awesome. This wasn't one of those typical baseball fights where it's just a bunch of pushing, shoving, and cussing while announcers get indignant over the air. This was a good ol' fashioned donnybrook, and if you're going to have one of these, you may as well go all the way. The Braves and the Padres certainly did 30 years ago, and it's a true testament to the quality of this near-riot that we're still talking about it and watching video of it to this day. If you're reading this and you were actually there or watched it live on TV, please don't be afraid to share your experience of that day, because I'm sure it was crazy for everybody involved, even the spectators.

The Braves may not have won much in that decade, but at least they have this wild moment to look back on.  Now, enjoy this image of Hall of Famer Joe Torre in the throes of balding even 30 years ago. 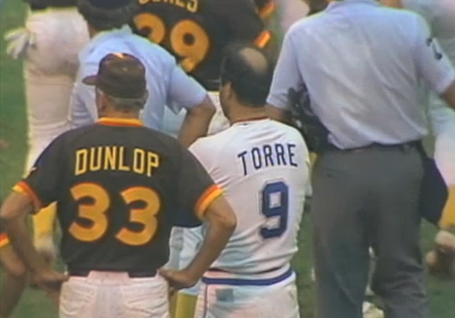