After splitting the first two games of the series, the divisional rivals square off tonight in the series rubber match.

Share All sharing options for: Open Thread 4/10: Braves vs. Mets

After Opening Night didn't go so well, the Night After Opening Night was nearly the exact reverse (except for the 9th inning but the Braves still won so it's still a reversal. Woo). Now, tonight's rubber match will see two somewhat inexperienced starters take the mound for both teams. David Hale will be making his 4th career start in the Majors, while the Mets starter, righthander Jenrry Mejia, will be making his 13th start in his career.

Meanwhile, there's another shakeup in the lineup, though this one isn't for tactical reasons. Andrelton Simmons will be sitting out tonight's game after jamming his right wrist in last night's game, which means Ramiro Pena will be starting at shortstop and taking Simba's place in the lineup.

That place would have been 8th, because B.J. Upton is making his return tonight, and he's right back in the 2-slot. Here's hoping that he'll at least be able to make contact with some balls tonight, as he appeared to be headed on the right track on Monday night. Sort of. It's a new night and he's had a night to "think about it" so maybe things will get better? Also, Ryan Doumit will be catching tonight as well. In Mets' news, Ike Davis will be making his return to the lineup tonight.

Here are the lineups: 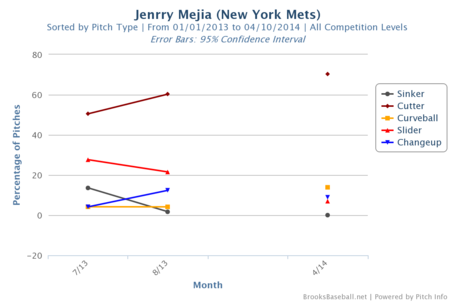