With the draft coming up, we take a look back at Atlanta's draft classes from this decade.

Share All sharing options for: A look back at Atlanta's 2010 Draft

We're less than a month away from the 2014 First-Year Player (Rule IV) Draft, which kicks off on Thursday, June 5. In an effort to get geared up for this year's draft, the Talking Chop minor league team will take a retrospective look back at Atlanta's last four drafts: 2010, 2011, 2012, and 2013. We'll break down the top ten players to emerge from each draft class and tell you about their story and career in Atlanta's system (and elsewhere, in some cases!)

The 2010 draft saw Atlanta continue a focus they had for a large part of the late 2000s: Young, projectable prep pitching and high-ceiling, low-upside hitters. It's thus not surprising that most of the successful picks from 2010 were bats. What is surprising is that, given the franchise's history, not one pitcher drafted in 2010 has really panned out for Atlanta. The 2010 draft was a mixed bag, but anytime you can get a potential Hall of Famer out of a draft, you've got to consider it a success.

Without further ado, let's jump right in to the Braves' 2010 draft class!

Simmons is a better defender than Vizquel and has more pop than Omar or Ozzie, but he does have to develop the patience Ozzie and Larkin found by their mid-20s. The downside here is a better-fielding Shawon Dunston, but the upside is a Hall of Fame-caliber shortstop who sparks debates over whether he or the Wizard is the best defensive shortstop of all time.

1. Andrelton Simmons, Shortstop, 2nd Round, 70th Overall, Western Oklahoma State College - I absolutely love the story of Andrelton Simmons's selection in the draft. As many of you may recall, the card that the Braves submitted to the draft listed Simmons as a right-handed pitcher. Simmons played both ways during junior college, and was known for his 98 mph heat on the mound. But Simmons insisted on an opportunity to play shortstop first, and the Braves agreed. Aren't you glad they did? Now, four years later, Simmons is on the cusp of stardom. He's the best defensive player on the planet, using that 98 mph heat and stellar glovework to devour most anything on the left side of the infield. He's almost too good, in that the casual fan has a harder time recognizing his Platinum Glove skills because he makes damn near everything look so easy. And did we mention his bat? He combines a preternatural ability for contact with a burgeoning power stroke, leading to well-deserved Yadier Molina comps. Should Simmons continue to refine his discipline (namely taking more walks), we could be looking at an MVP-caliber player during his prime.

2. Evan Gattis, Catcher, 23rd Round, 704th Overall, UT-Permian Basin - Gattis is the lowest-drafted player that will appear on this list, and his placement at #2 is a reminder of the true randomness of the draft. First round picks are never a given, and you never know who will surprise. Gattis's struggle with mental illness and drug addiction has been well-chronicled and provides an inspiring backdrop for his major league successes. He hit 21 homers for the Braves in his rookie year. So far this year, he's posting a .268 ISO and a 126 wRC+, both very impressive numbers for the catcher position. At best, the Braves have a slugging catcher with a 30 home run ceiling under team control until 2019. At worst, they've got a solid backup catcher and excellent pinch hitter. Not bad for a 23rd round draft choice!

3. Joey Terdoslavich, First Baseman, 6th Round, 194th Overall, Cal State Long Beach - Terdoslavich, or "Terdo" as he is affectionately referred to by Braves fans, was originally drafted as a third baseman. Atlanta tried their best to see if he could stick there, but it wasn't meant to be. He's ideally suited to be a DH, but can be serviceable at first base and left field. Terdo broke on to the radar in 2011, when he shattered the long-standing single season doubles record in the Carolina league by swatting a remarkable 52 two-baggers in 131 games. He faceplanted in Gwinnett the following year, but rebounded with a strong campaign in 2013. Terdo could have a future as a second-division regular, but he's blocked in Atlanta (give me the DH now) for the foreseeable future.

4. Todd Cunningham, Center Fielder, 2nd Round, 53rd Overall, Jacksonville St. University - Cunningham was Atlanta's first second-round pick, one they got from the Orioles as compensation for Baltimore signing Mike Gonzalez. Cunningham was always thought of as a high-floor, low-ceiling type player, and he has reinforced that notion during his years in Atlanta's system. Cunningham doesn't have the pure speed of a prototypical center fielder, but he does have an above-average hit tool and a decent eye. His most likely ceiling is that of a fourth outfielder who can play all three spots in a pinch.

5. Phil Gosselin, Second Baseman, 5th Round, 164th Overall,  University of Virginia - Gosselin is another player like Cunningham, in that he has a relatively high-floor and low-ceiling. A polished hitter coming out of UVa, Gosselin is enjoying a career year in AAA so far, hitting .331/.358/.437. And like Cunningham, Gosselin's most likely path to the majors is on a bench. He has no standout tools, but he's also not particularly deficient in any category either. Given the glut of fringe-average second basemen in Atlanta's system right now, Gosselin may spend the forseeable future in AAA, though injuries could give him the chance to play on Atlanta's bench.

6. Brandon Drury, Third Baseman, 13th Round, 404th Overall, Grants Pass High School - Atlanta's 13th round pick was a high-upside but raw third baseman in Drury. Drury was the final piece of the deal that brought Justin Upton and Chris Johnson to Atlanta. I said at the time of the deal that I thought Drury could end up being the player the Braves most regretted trading. Though he's still just in High-A, Drury is showing off the power stroke that excited Atlanta back in 2010, putting up an OPS of .844 in 179 plate appearances this year. Should everything break right, Drury could be a starting major league third baseman, but he's still a ways away.

7. Matt Lipka, Center Fielder, 1st Round (Supplemental), 35th Overall, McKinney High School - Lipka has been one of the most disappointing first round selections the Braves have made lately. Lipka was billed as a future leadoff man for Atlanta, but his bat, eye, and speed on the basepaths have all disappointed. Through 4 and a half seasons in the minors, Lipka has posted a slash line of .253/.311/.334. And his most recent two seasons have been worse than that average. Lipka showed flashes of his potential in spring training this year, but the fact remains that he still hasn't put together a decent season yet. At this point, it's fair to wonder if Lipka will ever reach the big leagues. If he does, I don't imagine it will be as a starter, barring some crazy renaissance. 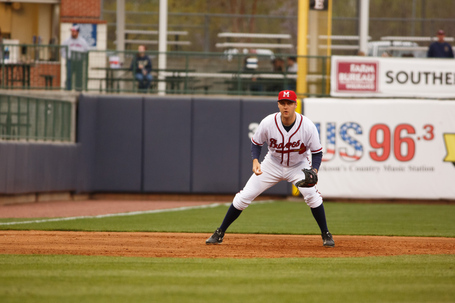 8. Joe Leonard, Third Baseman, 3rd Round, 101st Overall, University of Pittsburgh - Leonard was yet another low-ceiling college bat the Braves grabbed high in the 2010 draft. After playing all of 2013 as Gwinnett's starting third baseman, he was sent to Mississippi this year so Edward Salcedo could get plenty of playing time in Gwinnett. He's been no more than a part-time player in Mississippi however, as Kyle Kubitza has gotten the lion's share of playing time. At this point, Leonard's only calling card is his defense. The bat simply won't play. 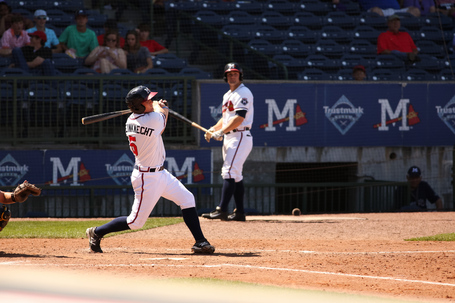 9. Barrett Kleinknecht, Shortstop, 12th Round, 374th Overall, Francis Marion University - Drafted as a shortstop, Kleinknecht's bat has never been his calling card. Kleinknecht is a true utility man, having played every position but center field in his minor league career. He's primarily a utility infielder, but has played the outfield, caught, and even pitched in a pinch. He's bounced all over the minor league system, filling in wherever he's needed. The odds are strongly against him ever making the bigs, but he's carved out a nifty and unique career in the Braves' minor league system. 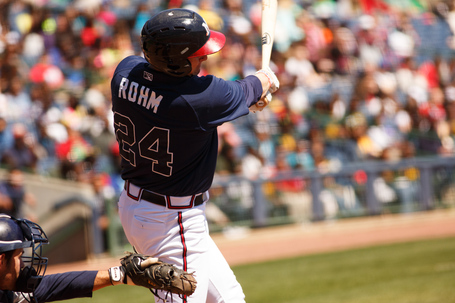 10. David Rohm, Right Fielder, 9th Round, 284th Overall, Fresno City College - Rohm is a corner outfielder with decent doubles power and an alright contact stroke. He hit .302 and slugged .413 last year in Lynchburg, but he was repeating the level. Now 24, Rohm is scuffling to get his feet under him at AA Mississippi. Don't plan on seeing him in Atlanta.

*All photos credit of Tate Nations, used with permission