Phil Gosselin called up to Atlanta

Gosselin will join the team tomorrow in Chicago, and a "corresponding announcement" is forthcoming.

Share All sharing options for: Phil Gosselin called up to Atlanta

After Phil Gosselin was lifted for a pinch-hitter in the third inning of Gwinnett's game on Saturday night in Norfolk, it seemed as if something might be up involving the infielder.

Todd Cunningham then confirmed the speculation that something was up, tweeting (and then subsequently deleting the tweet) that Gosselin was set to head to Chicago to join the Braves in the morning. 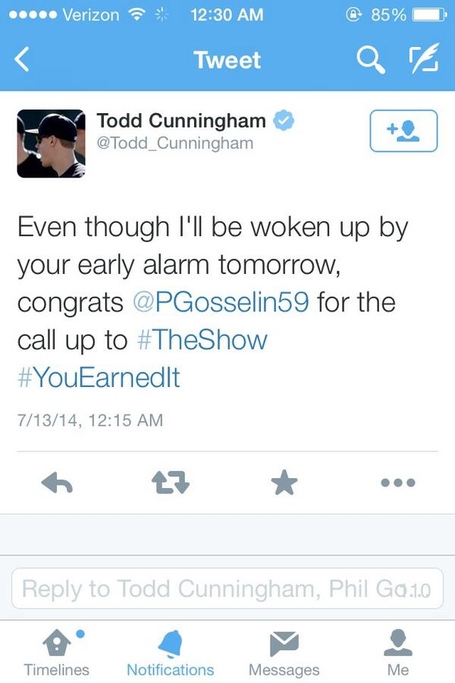 Mark Bowman then tweeted to confirm that Gosselin will join the team tomorrow, and that a "corresponding announcement" will be made in the morning.

Phil Gosselin will join the #Braves tomorrow. A corresponding announcement will made in the morning.

Gosselin has had a stellar campaign for the AAA Gwinnett Braves in 2014, slashing .343/.379/.493 in 87 games and 347 at-bats. Gosselin has been a jack-of-all-trades defensively this season, logging significant time at second base, shortstop, and third base, and also playing some outfield and first base.

There's no use speculating about what the "corresponding announcement" tomorrow morning will bring, but many have theorized that this could be the end of the Dan Uggla era in Atlanta, via a trade or a DFA.

Regardless, Gosselin offers useful positional versatility and a bat that should be better than what Ramiro Peña, Dan Uggla, and Tyler Pastornicky have given the Braves off of the bench this season. It would be unrealistic to expect him to continue hitting at a clip even remotely near what he's done in the minors this year, but for a bench that has been absolutely putrid, an average-ish bat could be quite helpful.

We'll continue to update you when we learn what the corresponding move is tomorrow.