The Braves met the Mets, and they swept the Mets.

Share All sharing options for: Series Recap: Braves Vs. Mets

With that being said, it wasn't an all-dominant performance for Atlanta over these 3 games, and indeed, they were in plenty of danger in Game 1 of this series, which is when it looked like the Mets were going to once again come into Atlanta and snatch a victory. For the first 7 innings, the Mets were driving merrily along on course for a victory. Then, the bottom of the 8th happened. Here's a visual representation of that inning for the New York Mets: 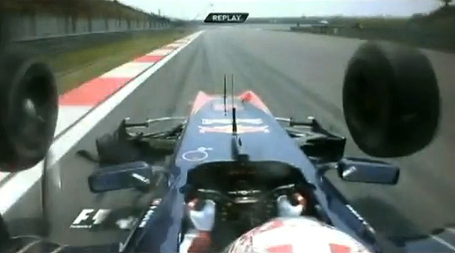 Indeed, the wheels came off. 3 errors (including one from Juan Lagares of all people) led to 3 runs for the Braves, including the go-ahead run. As insurance, the Mets walked Freddie Freeman with the bases loaded to give the Braves an extra cushion. A 3-1 game ended up being reversed into a 5-3 result for the Braves.
For Game 2, the bullpen was in the spotlight as they were called upon pretty early in the game. This was especially the case for Shae Simmons, who came on in the 5th inning, which is about 2 or 3 innings earlier than we expected to see him. Nonetheless, Simmons stepped up and put in a nice and clean outing, including getting out of a sticky jam that he inherited from Mike Minor. The next 3 bullpen arms followed suit for the 7th, 8th, and 9th innings, as Luis Avilan, Jordan Walden, and Craig Kimbrel came in and completely shut the Mets down, which preserved a close 5-4 victory for the Braves.
The stage was set for the sweep last night, and the Braves duly delivered thanks to a confident performance from Julio Teheran on the mound. The Braves jumped on Jacob deGrom very early, and a 3-run RBI double from Chris Johnson in the 1st inning ended up being enough help for Teheran on the night. Teheran pitched 7 innings, then solid bullpen work from Anthony Varvaro and Jordan Walden (plus a spectacular defensive play from Tommy La Stella) helped keep the lead for the Braves, as they held on to a 3-1 lead and completed the sweep.

Overall, this was a lovely series for the Braves; The offense got hits when they were needed, the defense was stout, and the pitching was good for the most part. Most importantly, it appears that the Braves are beginning to take advantage of a soft schedule, and one that probably won't get significantly more difficult for a while. We've entered the 2nd half of the season, and this 7-game win streak is a great way to enter the business end of the season. Hopefully this continues as the Braves head into another winnable series against the Diamondbacks.